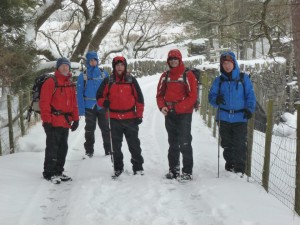 The club meeting for March was at the George Starkey Hut in Patterdale, near Ullswater in the Lake District.

Most people arrived around Friday lunchtime after battling through blocked roads, snow storms, high winds, overturned lorries and crashed cars. After dumping their gear in the hut Andy R, Mac, Ian, Martin, Chris and Dan went for a short snowy walk up the nearby Grisedale valley to stretch their legs. This was followed by a walk down to White Lion Pub in Patterdale for a couple of pints and dinner.

Later in the evening Kent and Simon battle through the snow drifts growing on the roads to reach the hut near midnight, but Mark and Andy W were not as lucky as the building snow drifts blocked the road. They spent the night at a kind person’s house in Dockray (only 5 miles from hut) who took pity on them and saved them from a very cold night in the car.

On Saturday morning after Mark and Andy W reached the hut everyone headed off to try and climb the peak of St Sunday Crag. They battled deep snow, gale force winds and freezing temperatures up to The Nab on Birks before turning back as the conditions became increasing dangerous. After returning to the valley floor the group decided to try the other side of the valley. From Patterdale they crossed Goldrill Bridge and headed to Broaddale Hause to attempt the walk up Place Fell. Again the MKMC team was battered by high winds and struggled through deep snow before successfully reaching the top of this Wainwright hill.

On Sunday Martin and Chris headed home, while the rest split into two groups. In slightly better conditions Andy R and Dan headed back up to Broaddale Hause and across the increasing arctic landscape to another Wainwright hill called Angletarn Pikes. The rest decided to give St Sunday Crag another go. Again they battled through the winter conditions until they reached the top. On top of St Sunday Crag the conditions were pretty extreme, so they headed on towards Fairfield and then contoured down to Grisedale Tarn, on the way down the snow was up to their waist in places. They then returned via Grisedale valley.

Thanks to all that attended and despite the Arctic Conditions made it a very good meet. MKMC members attending: Andy R (organiser), Dan, Kent, Simon, Martin, Mark, Andy W, Ian and Mac plus guest Chris.

Selection of pictures in the Gallery section. The next club trip is on the 12th April 2013 to the Downes Hut, owned by the Climbers Club in the Peak District.