The Parish Hall at Kirkby Malham is “Basic” group digs, comprising a large main hall, which serves as the shared sleeping area, a bit like camping indoors plus a large kitchen, toilets, showers, storage space for bikes, gear, etc.

Friday – Alan, Andy & Dan arrived at the village hall first, had some lunch and then went for a walk up to 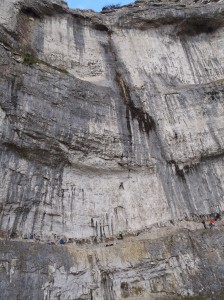 Malham Cove, watched the climbers there and then had a look at the limestone pavements above before returning via the Pennine Way to the hall. This was followed by a couple of pints with fish & chip dinner at the local pub in Kirkby Malham while waiting for the rest of the party to turn up during the rest of the evening.

Saturday – Emma, Andy, Steve Simpkins, Cheryl, Dan, Shane & Jenny went on a circular 12 mile walk along the valley to Gordale Scar, scrambled up the waterfall at the back up onto plateau, across to Malham Tarn and then up onto Kirkby Fell before returning to Malham. After that a visit to the Cafe for tea & cakes and the pub for a pint or two both they return to Kirkby Malham. 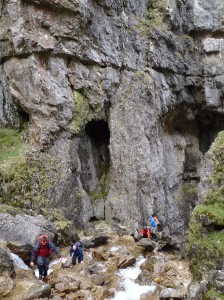 Alan, Tomasz, Stuart, Gilly, Gavin, Jason, Michael went climbing at Eastby but after a morning of cold fingers and biting wind drove to Malham and walk to Gordale Scar & Malham Tarn where they meet Steve & Birgit Scott who had taken a rail journey to Horton then took a linear walk along the Pennine way from Horton in Ribblesdale over Pen-y ghent. They all then returned to the tea shop in Malham for cream teas.

Saturday night saw nearly everyone headed down across the road for drinks & food at TheVictoria Inn in Kirkby Malham.

Steve & Birgit Scott walked from Ribblehead viaduct along a little dale (Whernside) to Blea Moor. Before retreating to the village of Hawes and having more cream teas.

James, Shane, Tomasz, Stuart, Gilly, Gavin, Jason, Michael went off climbing at Almscliffe, after they drove through rain all the way there but it actually stayed dry, and even sunny at points!