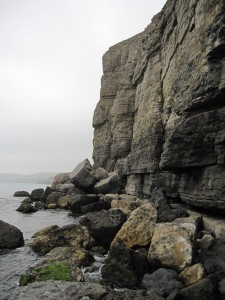 Saturday dawned dry, warm but misty, and after a leisurely start everyone set off for their chosen destinations. Alan, Cheryl, Jason, Ian and Anna went to Guillemot Ledge / Cormorant Ledge area; Bob, Sophie, Sam and Lydia drove to Winspit for a spot of sport climbing (training for Sardinia) and Sean went swimming / snorkelling.

Sunday was a little cooler to start with, but the day soon warmed up. Alan and Jason had unfinished business at Cormorant Ledge, Bob and his group wanted more sport climbing and headed for Dancing Ledges.

Ian and Anna headed for Boulder Ruckle and Cheryl went exploring Durlston Country Park and had some productive blackberry picking. Sean once again took to the water snorkelling.

It was an ‘Indian summer’ weekend and everyone was careful not to get sunburnt. Adventures were had and everyone had a story to tell! Hopefully Swanage will become a regular destination for the club.