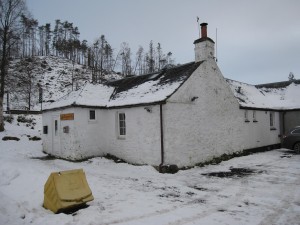 We stayed in the ‘The Auld Kitchen’ at front of building on a two-tiered alpine-style sleeping platform and shred the large kitchen, separate food store & dining area plus drying room and boot room, sitting room with solid fuel fire with another club.

Thursday: Good drive up to Scotland through some very spectacular scenery. We had dinner & a few beers in the Ben More Hotel next door to the Hut. It was a good evening complete with Scottish folk music supplied by someone that looked like Billy Connelly’s dad. 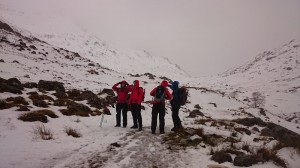 Friday: The team made an attempt on Ben More. We walked from hut and then headed up a side valley from Benmore Farm aiming for the col between Ben More and Stob Binnein. The team was battered by the weather all day and also had to deal with difficult conditions under foot – big boots and crampons for most of the day. Unfortunately we failed to get to the summit due to the storm force winds that hit us on the final ridge to the Ben More summit making it difficult to stand up let alone more forwards. As the weather was getting even worst we decided to call it a day and return to the hut. Dinner this time was at the Crianlarich Hotel, the food was good but place lack atmosphere. 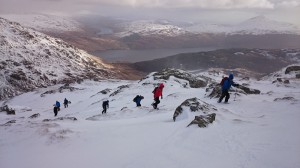 Saturday: The weather improved and so the target for the day was Ben Vane on the west side of Loch Lomond. We parked at Inveruglas by the Loch side and walked into the hills from there. It was an excellent day in deep snow, traversing two steep snow fields and clambering over numerous false summits before reaching the summit plateau. Once again we were battered by the wind get the top but this time made it to the summit cairn. A brilliant effort by the whole team – an amazing winter mountaineering adventure. In the evening it was back to the Ben More hotel for another dose of Scottish folk music and an outstanding performance of “Black Betty” by Kent (videos available on request). 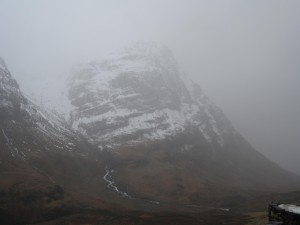 Sunday: In the morning bad weather returned again, so the team decided to go for a low level walk. We headed up to Glen Coe and to do part of the West Highland Way – Altafeadh to Kinlochleven (6 miles) once again we walked through lots of snow and had some entertaining river crosses as they were hidden under the snow and ice. This was followed by a late lunch at the Ice Factor in Kinlochleven while watching people struggle in the ice climbing area. Upon the return to the hut Alan & his assistants pulled up their sleeves and helped prepare dinner of haggis, tatties, neeps and vegetables followed by a dessert of Raspberry cream with shortbread. Evening of food, beer and tall stories around the fire in the sitting room followed. 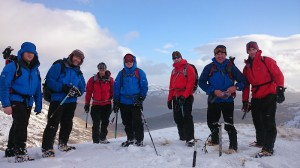 Thanks to Alan for sorting out all the food and everyone joining in for another excellent weekend (despite the weather).