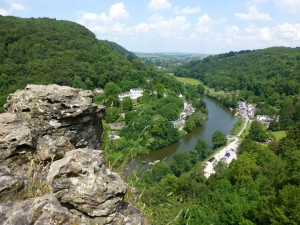 This was the first camping meet of the year, and the weather was perfect. In fact Alan was so confident of good weather that he took his ‘festival’ pop up tent.

Two members, Alan and Michael, headed West at first light on Friday morning, arriving at Wintour’s Leap at around 09:30 am. They had an enjoyable day doing 3 multi-pitch HVS routes and a 3 star severe. Wintour’s Leap is trad climbing, but much of the protection is from in-situ pegs which give the routes a ‘sport’ climbing feel.

At around 6 o’clock they headed for the campsite, arriving there at the same time as Gillian and Adam. Just before dusk Jason and Raj arrived. The campsite is at Rushmere Farm, half a mile west of Coleford in The Forest of Dean. This was the same site that MKMC stayed at in June 2014. Facilities are luxurious with hot and cold running water and free hot showers in a centrally heated toilet block, and electric hook ups for those with camper vans.

Saturday morning, and the destination was Symonds Yat. Louie joined them for the day, and while Gillian and Adam explored the forest, the rest of the group set off for the ‘Far South Buttress’. This was the first time Raj had done trad climbing, and he took to it with no problems what-so-ever. Louie, by his own admission, a bit of a novice at this sort of thing, was also breezing up routes in good style.

Back at base everyone decided to eat out. Their first choice pub was not serving food as there was a function on, so they headed for the next hostelry on their list, the Dog and Muffler. They had a bit of a wait before the food arrived, but it was worth it. Jason said that his lasagne was the best he’d ever had, and insisted that the waitress pass on his compliments to the chef.

The next morning Gillian and Adam had to get back to MK. It had been a little damp in the night so the remaining 4 struck camp and set off to Wyndcliff Quarry, ‘guaranteed’ to dry quickly after rain. Wyndcliff Quarry is a mixture of sport and trad routes, and the group spent an entertaining day ticking off routes.

A good weekend was had by all. The Wye Valley is not much further to travel to than the Peak District and definitely deserves another trip soon.