The forecast was looking “exciting” but that didn’t deter six hardy members of MKMC. 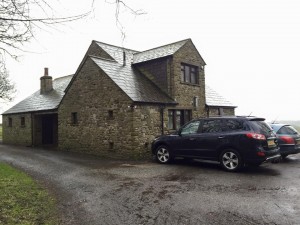 First to arrive were Gillian and Adam, followed 15 minutes later by Alan and Andy W. Having got all their kit into the hut Gillian and Adam set off on a gentle drive to take photos of the Ribble Head Viaduct while Alan and Andy walked first to Clapham and then on to Austwick to book a table at the Gamecock Inn for the Saturday evening.

Back at the hut the last members of our party, Dan and Jason B. arrived in the evening. We whiled away the time watching ‘Beyond the Edge’ on a laptop, and Adam saved the Earth from total annihilation on his tablet. 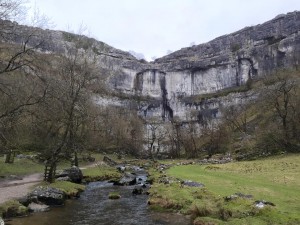 Alan had been planning to walk the Yorkshire 3 Peaks, but the weather forecast ruled that out for him. Instead ⅔ of the group decided to do a circular lower level walk from Settle to Malham and back. We had arranged to meet up with Gillian’s party which we duly did on the limestone pavement above Malham cove. Jason was suffering from blisters and got a lift back with Gillian.

In the evening we had a very pleasant meal in Austwick and Shane and his 2 children joined us as they were heading South after a camping holiday in Scotland. Back at the hut Max (age 5) entertained us with his energetic style of dancing.

Sunday and we all departed our different ways.

Andy and Alan went to Ingleborough and walked the “Waterfalls Walk”. Jason and Dan went to investigate Janet’s Foss and Gordale Scar. Gillian was feeling below par and decided on a leisurely drive home.

A fantastic hut, and despite the inclement weather a great weekend.