The meet kicked off with some sport climbing and a via ferrata. That evening was spent setting up at Les Arolles campsite and meeting Bob and Sophie – with the guided tour of their incredible van-home inspiring extreme jealousy. 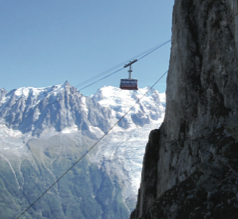 Alan and Jason took the cable car to the Brevent and climbed the tremendously exposed Frison-Roche (TD-6a) after a tricky approach. Louie, Shane and Lexie enjoyed great views from the 2,965m summit of the Aiguille du Belvédère (PD-3a) and a bracing swim in Lac Blanc. 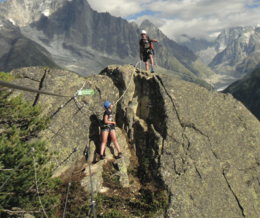 Shane and Lexie prepared to depart for Germany while Alan, Jason and Louie hiked in for multipitch sport on the slabs of Les Cheserys. The early hours of Thursday morning saw the most dramatic event of the whole trip. A drunk Australian (Shane not guilty on this occasion) mistook Alan’s tent for his own. However, before the intruder could climb inside Jason, bravely fended him off. 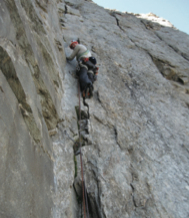 With the threat of rain in the afternoon, Jason and Alan decided to seek out a roadside crag in the form of Servoz, just a couple of miles down the valley. They found excellent climbing; steep but with positive holds. Louie teamed up with a random American to enjoy Voie Caline, a 350m bolted scramble at the gentle grade of 3c. 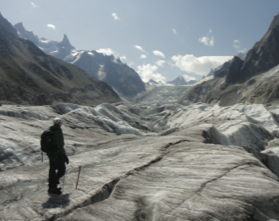 Jason and Louie caught the Montenvers train and descended exposed ladders onto the Mer de Glace. Using crevasse rescue skills practised on a metal post in the campsite the night before, they navigated their way up the glacier to some spectacular views and a great day out. Alan waited at the camp site for Juan (who had flown in to Geneva late the previous night) and the pair completed some more multi-pitch routes at Les Cheserys. 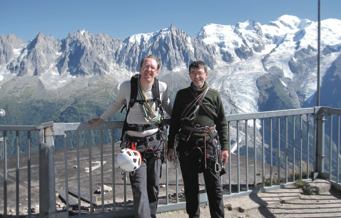 On the last day of the trip, Alan, Jason and Juan caught the Flegere cable car to the start of Via des Evettes. This newly-installed via ferrata finishes with a “heart stopping” 50m Himalayan wire bridge. The intrepid trio continued onto a Via Corda, which they rated “great fun” and completed just in time to catch the last lift down.

As there was still daylight (and energy) left, Alan, Jason and Juan returned to Servoz for an evening session to complete unfinished business on several routes. Louie teamed up with a random to climb the Petits Charmoz Traverse (AD-4c), which has some great pitches, exposure and views, despite a dodgy approach.

All in all a fantastic trip and most importantly no injuries.