Our base for the weekend was The Chamois Mountaineering Club hut (next to the old Beacon climbing wall). 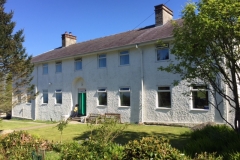 Once again our hut was well appointed and very comfortable and we had good weather. This was a joint meet with Cleveland Mountaineering Club, of which Fraser was also a member, and the objective of the weekend was to have fun, and also celebrate Fraser’s life.

Dan, Andy and Kent had arrived at the hut on Thursday night, so first thing on Friday morning they headed up to Cefn-du and Bwlch-y-Groes before splitting up. Dan to descend to Llanberis while Kent and Andy continued to Moel Eilio.

Martina had arranged a tour of the DMM factory, also attended by Dan, Alan W, Alan M, Ian, Alkesh, David, Michelle and Jason. Everyone found the visit fascinating and Ian and Dan quizzed the guides with lots of technical questions. 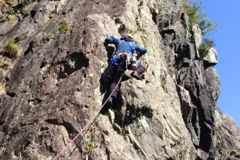 Most of this group felt compelled to climb a few routes in the Llanberis Pass during the afternoon, while Michelle walked a circuit of Cefn-du.

Mac and Sam arrived in the afternoon and climbed No. 2 Crack on Tryfan Bach.

The rest of the group arrived during the course of the evening. 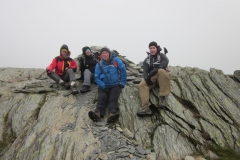 Andy, Dan, Michelle, Tudor and David drove down to Bleanau Ffestiniog for a walk around the Moelwyns. They Ascended Moelwyn Bach, Moelwyn Mawr and Moel-yr-hydd.

Kent, Alkesh and Matt went to the same place intending to climb, but were discouraged by the wind and ended up doing this route in reverse.

Alan M and Jason went to Tremadog and scaled Nifl-Heim and The Plum.

Ian and Anna took the camper to Gogarth and climbed Resolution Direct.

Martina tackled a solo scramble up Carnedd Dafydd and summited despite the very exposed and windy conditions.

On Saturday evening MKMC and Cleveland MC sat down together for a dinner of soup, followed by haggis, tatties and neeps and steak pie. The evening was a fantastic success with a brilliant address of the haggis by Tom (CMC) followed by Burns readings (well done Martina, Michelle and Alan W). At the end of dinner Alan M read a short eulogy to Fraser.

Dan, Andy and Kent chose to enjoy a large breakfast from the Siabod Café and then a walk round Capel Curig to ‘shake it down.’ 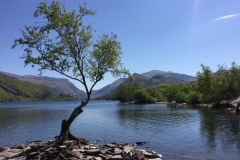 Gillian’s group went in search of the “lonely tree” on Lyn Padarn (and found it).

Mac and Sam planned to do Flying Buttress, in memory of Mac’s first climb with Fraz. “C’mon youth, the weather’s shite. Let’s go and do a Diff in big boots.”

As it turned out parking in the pass was a real problem, so they headed off to Little Tryfan. Sam lead a couple of routes before they headed home in the late afternoon – still in the glorious sunshine.

Welcome, or as Frasers might have said … ” Good evening Chaps”

Fras joined MKMC in 2012 and since then he had a massive influence on many of us that knew him. It is a privilege to have been able to call Fraser my friend. He was supportive, enthusiastic and a genuine, lovely guy who loved life.

During 2016 we suffered a terrible tragedy. I remember well the occasion when I heard the news. There were two things Fraser was passionate about:

Fraser was a big character who was never without a huge grin on his face – always a sense of humour.

Some of his words from e-mails that I had from him: