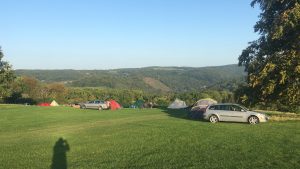 They headed off to stretch their legs into Tintern on arrival at Tintern Abbey Mill coffee shop they had an afternoon and Welsh tea, well it would be rude not too!  (The path brought them straight to the coffee shop – honest) A great start to the weekend sat in the sunshine.  When they got back to the site Floyd & Alex had arrived and were starting to pitch their new tent,  being  a team Alan & David gave them a hand.  Keith & Anne where in their caravan for the weekend, they wondered over, well Anne hobbled (hope the break keeps on healing). Gill was the last to arrive and quickly went from van to house mode. Floyd, being a hero had bought some wood for the fire, which was soon ablaze. The evening was spent sitting and chatting around the camp fire & making initial plans for Saturday’s climbing.

David was keen for a long day’s walk so he was up and off early for a long walk. Alex T arrived he, Alan and Keith set off for Ban-y-gor rocks and a day’s sport climbing. Gill, Adam, Floyd and Alex M joined them a little later in the morning. Our seven intrepid climbers enjoyed a range of sport routes. 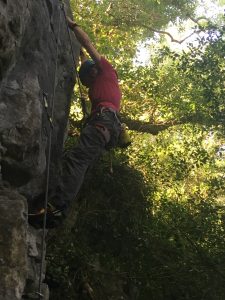 The Itch You Can Never Scratch provided a particular problem, the direct approach defeated a number of our team. The most spectacular was Alan, at the slight overhang he pulled the rope up to clip high but gravity beat him to the clip! He was expertly held by Gill, backed up by Keith. Silly Alan he shouldn’t have been clipping above his head. Others managed to find the trick of the route (sorry no spoilers) and topped out.

Gill, Adam, Floyd and Alex M did a few routes and then left the climbing to go for an afternoon walk. Leaving Alex T, Alan and Keith to carry on climbing. This was Alan’s first sport climbing and he was chuffed to top out on The Chubby Brown Syndrome a 6a, as did both Keith and Alex T. The most daunting part of a sport climb still awaited Alan – the strip down and cleaning of the route! Every bone in Alan’s body was screaming NO as he untied from the climbing rope at the top of the route, while safely clipped on with his cow’s tail of course. Scary, very scary! Stripping the quickdraws on the way down isn’t quite as easy as it appears in the videos. 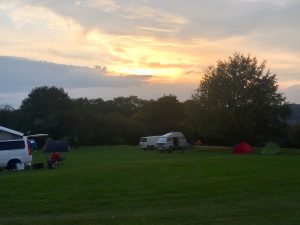 After a couple more routes it was back to the campsite for tea and birthday cake. After all it was the 40th birthday of Alan’s Trangia stove, which is why he was cooking on the original meths burner and cooking camp food from his early days of camping. When everyone returned more cake was eaten and Alex headed off home. The evening was spent cooking, barbecuing and eating around another campfire watching the stars and chatting.

A 1980s band came to mind Wet, wet, wet! Breakfast was eaten in tents/vans waiting for the rain to stop. When it did camp was struck very quickly. Alan has an orange survival bag with all this tents and he wet tent was simply bungled into this and put in the boot of the car. Gill had the easiest pack away: tidy van – get Adam out of the roof – close roof – drive away. Or was it Keith and Anne: close caravan door – hitch caravan to car – drive away? David, who used to live in Chepstow had offered to take us on one of his favorite walks around his old stomping ground. We parked up and headed across the river, as we were leaving town David pointed out his old house. Soon we were in fields and heading into woods. We appeared at the top of Wintours Leap and could see the whole of the Wye Valley below us. It didn’t take long to descend to the valley and we were soon walking along side the river. At one point we crossed a large boulder field, which was a little bit challenging for Bob and Sky, but with help and encouragement they managed to cross it. I’m sure those extra legs helped! 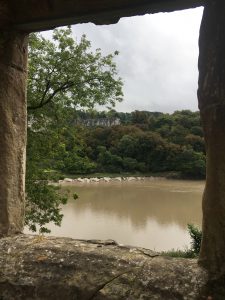 On the way back to Chepstow we passed the remains of St James’s Church, Lancaut. This meant the start of a climb through the trees. When we popped out we were at the car park for Ban-y-gor rocks from yesterday. Next thing we were crossing the river back into Chepstow. We found a bar/café for a group meal before returning to the cars and the drive home.

Pity about the rain on Sunday, but when has the weather ever stopped MKMC from having a great weekend?