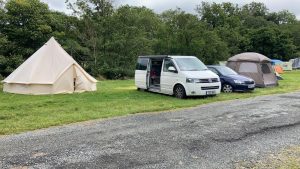 With Wales hoping to move to Level 0 on the Saturday we were camping instead of the first summer hut trip. Next year we’ll do that summer hut trip. The forecast wasn’t the best but we were all desperate for a weekend in the mountains. Matthew wanted to make it a three-day weekend so travelled up on the Thursday evening. 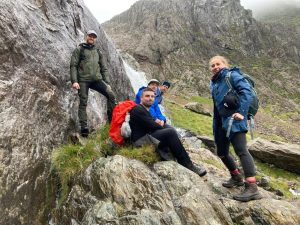 Gill and Shane were the first to arrive on Friday and pitched Shane’s ‘one person’ tipi by Matthew’s yurt by the river. They then went for a gentle stroll (this is one of Shane’s ‘gentle’ strolls) from Pen-Y-Pass to the basin below Grib Goch where Shane took a shower in the waterfall. (Hot showers were available at the campsite readers.) This is where they bumped into Victoria, James, Rich and Tom. They all walked back to the car park together. Alan W was the next and pitched near by. Throughout the early evening the rest of our group arrived and pitched their tents just on the other side of the road; including Lee, a potential member who was coming along to get to know us.

Adam H, who was there with other friends dropped by for a chat. Small world eh? As the temperature dropped we gathered in Shane’s tipi to enjoy the warmth of his portable wood burning stove while spending the evening catching up with each other. 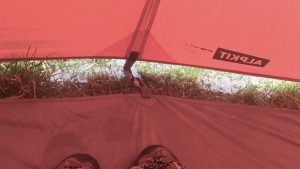 It was Wales, in the summer so that means it rained over night and carried on in the morning. We’re a hardy bunch; did we let a little water spoil our fun? Of course not we’re hardy mountaineers. Mind you Alan W and Shane were weary of the amount of ground water that appeared under their tents over night so they moved; Alan to the other side of the road and Shane to the other side of the site. 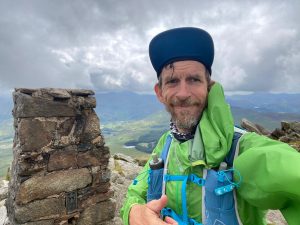 Shane was Shane and set of to run Snowdon via the Pyg track and descend the Watkins Path before ‘knocking’ off Moel Siabod on his way back. His plan to return to the site was ‘dynamically’ modified; the bar at Plas Y Brenin called! (Coffee of course.) Victoria, James and Rich set off to walk up Moel Siabod, non of this high speed stuff they were going to savour the view on their walk.

The rest of us Gill, Tom, Lee, Matthew and Alan W set off for Holyhead Mountain, as it was looking dry for most of the day. Setting off

from the RSPB car park we summited Holyhead Mountain watched a few of the runners competing in the Cybi Coastal Marathon. The runners were going the opposite way around HolyHead to our group and we kept the runners spirits up by cheering and applauding their achievement we they went past us. On the walk up from North Stack the rain started. We were all well and truly drenched by the time we were back at the car park. If you’ve not been the RSPB café at South Stack serves excellent cake. They also don’t object to puddles under chairs and tables – good job as we were a wee bit damp!

Peter and Kathy joined us on Saturday evening having spent the day walking in the much dryer east! In the evening eight of walked up to the Tyn-Y-Coed for dinner. Some stayed cooked and ate on site; later on we gathered in Shane’s tipi before heading off to our own tents. 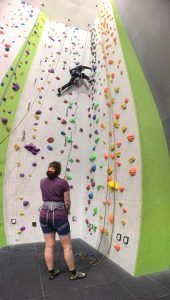 Another wet day was forecast. There were gaps in the rain as we packed up and loaded wet tents into our cars. Alan W used one of those large orange survival bags to bundle his tent into – crafty! Holyhead Mountain was looking dry again so James, Victoria, Rich Tom, Lee and Alan W all headed off their again, with the aim of climbing. There was considerably more room in the car park today. Peter and Kathy headed off to Beacon, Gill joined them after dropping Shane at Pen-Y-Pass. He ran up Snowdon and then down into Llanberis village, straight into Pete’s Eats in 1:40. Great effort, sensibly avoiding the summit trig point, considering the size of the queue for it!

The climbers on Holyhead Mountain enjoyed the grip of the Quartzite, a very grippy rock giving excellent friction. We enjoyed Wally’s Folly and Pigeon Hole Crack and the excellent belays at the top of them. 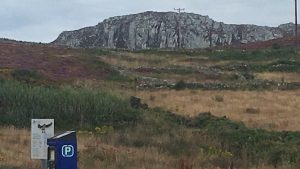 Being on the west of Holyhead island there was very little (nothing?) to stop the wind whipping in off the Irish Sea so communication was very difficult by shouting. There was a lot of gesturing! Today happened to be Rich’s first time outside; not too cold, even with the wind at the top, with excellent grippy rock. He enjoyed himself and can’t wait for more outdoor climbing trips.

Another good weekend in the mountains, especially considering we were doing some weather dodging! Holyhead Island is a worth destination and not just a wet weather option.