Another very successful club trip to the far reaches of West Wales blessed by fantastic weather (it always helps to be climbing in the sun). The group stayed at PorthClais campsite which was a very pleasant spacious cliff top hideaway. Thanks to Malcolm’s foresight we pitched next to the gap in the fence which meant that PorthFynnon and Porthclais slabs were only a 5 minute walk away – something that we made good use of for early morning low tide climbing on classics such as Red Wall and Porthclais crack.

Highlights of the trip included Zoe and Nick’s traverse of Lego Wall at Organ Pipes above crashing seas; Stuart getting 42 stars form only 26 routes; the atmospheric and technically fun ascent of Metamorphosis (and others) at Carreg y Barcud; and the fantastic scenery of PorthClais, Carreg y Barcud and South Buttress.

After a late night arrival Peter, Kathy, Rohan and his friend Jeff, Malcolm, Nick and Zoe headed over to Porth Fynnon and purple slabs, and then over to Porthclais. Excellent and quiet climbing before the weekend rush with Peter leading a few VS’s and Kathy accidentally seconding half of the E1.

The rest of the group (Alan, Stuart, Alex, Adam and his parents) arrived over the course of the evening having endured some pretty horrific bank holiday traffic.

Kathy and Peter got up early to head for low tide at Initiation slabs. 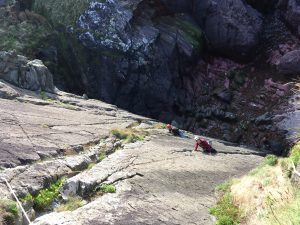 They managed one climb of Gemini (VD 2star) with Kathy just leaving the ground as the waves came in. Joined by Rohan and co one further climb was made in the inlet of Vanishing crack / Forbeeornotforbee with one member of the group leaving from a boulder surrounded by water – real sea cliff climbing!

Most people split their time between Caerfai, Porthclais and Pothfynnon but the busier crags meant fewer routes were climbed. Peter and Kathy enjoyed some swimming in Caerfai bay – it was toasty at 15 degrees 🙂

Alan, Stuart, Alex, Rohan and Adam headed off to Trwyn – with Alan and Stuart making it (just) up the multipitch Barad (E1) and everyone else enjoying good climbs with Rohan leading a group along the multipitch Budhad (VS).

Kathy, Peter (after an early morning trip up Red Wall – a classic HS above crashing waves) Zoe, Nick and Malcolm 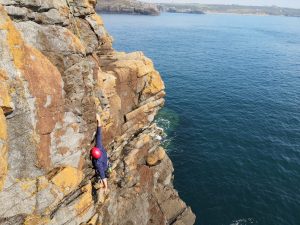 headed to South Buttress on St David’s for the day climbing on different rock and thanking god for cams! One of the more interesting routes of the day was the “Staircase” traverse – rated at only D but wildly exposed and again needing a lot of cams. Some bodyboarding at Whitesands bay – Kathy’s first time – ended a great day. We all walked into St David’s for a curry and waked back under the stars.

Some headed home but Rohan, Jeff, Alan, Stuart, Peter and Kathy headed to Carreg y Barcud for some truly atmospheric climbing at this sheer wall – although the search for decent anchor points caused some discussion. 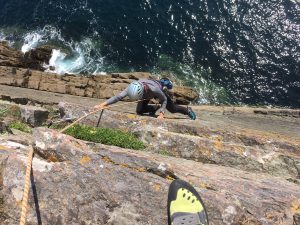 Luckily it had a few easier routes including the excellent Metamorphosis (HS) and Left Edge (VD).

Whilst VS/HVS and an E1 were tackled by the group we enjoyed watching some climbers demonstrate great technique on Beeline – which looked to us like a blank face. When we complimented the lead climber on the route she said it was just because you “couldn’t see the holds from below”.