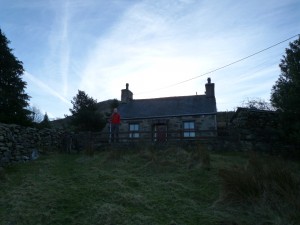 The club meeting for February was in the Chester Mountaineering Hut that can be found on the tourist path up Snowdon about 300m above Llanberis. The hut consists of a common room, dining room, kitchen, toilets and washing facilities, a shower and a drying room.

The first group to arrive on Friday was Andy, Jay and Kent. They first opened up the car park and checked everything worked in the cottage before setting off on a walk. Their quest took them out across the fields at the back of the hut and up through the Telegraph gap and then up onto Moel Cynghorion.  A late lunch on the top with cloudy views of Snowdon & Crib y Ddysgl then back to the hut. The rest of the party started arriving during the afternoon and evening.

On Saturday club members headed off into the North Wales hills at various times during the morning. Andy, Jay, Kent and Joanne did a circular walk from the hut up to Telegraph gap, across to the Rhu Path and up the South ridge to Snowdon, a short division to Crib y Ddysgl and then back to the hut via the Llanberis Path. Bob, Stuart and Jamie also went up Snowdon via the North Ridge & Crib Goch. Ian, Emma & Storme headed off climbing in the Llanberis Pass to do Flying Buttress. While Nigel & Gillian completed a circular walk from hut around the Moel Eilio range.

On Sunday Bob headed off on a training run for his Marathon preparation and Ian, Jamie, Emma & Storme climbed on Tryfan east face while the others decided to complete walks around Llanberis or headed for home.

Thanks to all club members for making it a good weekend and all those that helped Emma with her car troubles.

Selection of pictures from the weekend in the Gallery section.

The next club trip is on the 22nd March to the George Starkey Hut at Patterdale, near Ullswater in the Lake District.