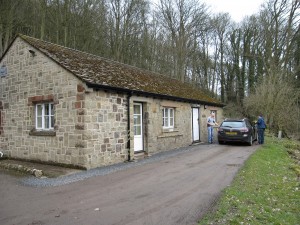 Our destination was the R. O. Downes Memorial Hut, nestling at the foot of Froggatt Edge. Seven MKMC members were booked on the trip. The first to arrive on Friday morning were Mac and Ian, and having bagged their bunks they headed up to the crag. Shortly afterwards Dan and Alan arrived and they followed suit up to the crag. The Edge was generally damp, with snow drifts resting against the base of some of the climbs.  A few easy routes were climbed before heading back to the hut. In the evening Ant and Lorraine arrived. 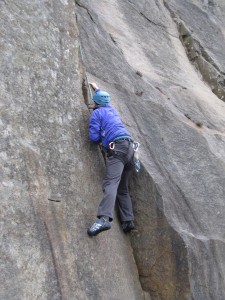 Saturday dawned promising warm and calm weather, and the final member of our party, Richard, arrived. Climbing Club members, also staying at the hut, had recommended Rivelin, being both sheltered and dry, so that’s where we headed. It was a lovely morning, but by mid-afternoon the weather became colder and more unsettled. By 4:00 pm the rain had set in to a steady drizzle and the group retreated to Hathersage, along with 100’s of other climbers.

Sunday, and Mac made an early start back to MK. The rain had abated, only to be replaced with very strong winds. Ant and Lorraine decided to climb at Horseshoe Quarry as they thought it would be sheltered and the rest of the party decided to give Froggatt another try. Once on the edge the power of the wind was even greater than anticipated, and we battled on to Curbar to check out the climbing there before returning to Froggatt to do a couple of easy routes.

For most of us this was our first trip this year climbing real rock. MKMC members attending: Alan (organiser), Dan, Ian, Mac, Ant, Lorraine and Richard.