Overall it’s been another very good year for MKMC with club membership again exceeding 70. Club activity has been high with a large number of members attending official and unofficial weekend meets and day trips across venues in the UK and abroad. So it’s worth looking at the website again or our facebook page to remember what a good year it has been. 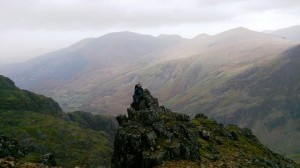 December 2013 – The Christmas Meet for 2013 was held at the Oread MC Hut in Rhyd Ddu to the south of the Snowdon. It was a wet and windy weekend but people made the best of it and managed to get into the hills around Rhydd Dhu and Beddgelet hills including scrambling along the Nantille Ridge. On Saturday evening a total of twenty one club members attended the Xmas meal in the Cwellyn Arms enjoying both the beer and the food. 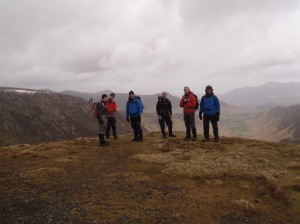 January 2014 – Burns Celebration Weekend was in the Lake District at the Fylde MC Stair Hut for the Burns night fare – haggis, tatties and neeps. This hut is situated in the Newlands Valley just west of Keswick, once again the weather was wet and windy but again members made the most of it and headed out into the nearby hills. 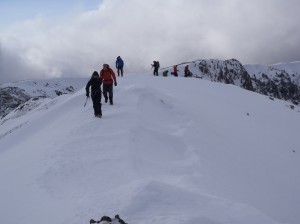 February 2014 – This trip was to the London University MC Caseg Fraith hut in Ogwen Valley of Snowdonia. For a third trip running the weather was against us, but yet again club members still managed to get out and about. 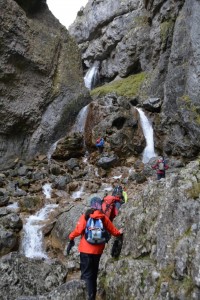 March 2014 – When we went to the Malham in the Yorkshire Dales we finally got some sunshine (and snow). Club stayed at The Parish Hall in Kirkby Malham “Basic” group digs, comprising of a large main hall, which serves as the shared sleeping area, a bit like camping indoors plus a large kitchen, toilets, showers, storage space for bikes, gear, etc. Most peope visited Malham Cove, watched the climbers there and then had a look at the limestone pavements. Additionally went to Gordale Scar, scrambled up the waterfall at the back up onto the snowny plateau, across to Malham Tarn and then up onto Kirkby Fell before returning to Malham. In the evenings nearly everyone headed down across the road for drinks & food at The Victoria Inn in Kirkby Malham. 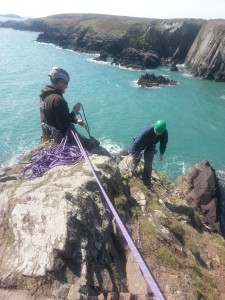 April 2014 – The Celtic Camping campsite at Aberieddy near St. Davids, Pembroke was very welcoming and with stunning views across the sea.The club members that attended the meet had a couple of good days of climbing at Porth-Clais, Carreg-y-Barcud, Craig Caerfai and Main Slab of Porth -y-Ffynnon plus a bit of coastal path walking. The weekend was a great success of a mix of climbing and walking and perfect socialising. 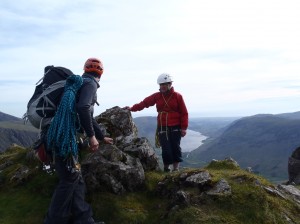 May 2014 –May club’s meet was at the beautiful National Trust Campsite which nestles under the Scafell mountain range at the head of Wastwater, the deepest lake in England, with its distinctive Nordic character and the pyramidal peak of Great Gable reflected in its waters. A few of us decided that we wanted a little more comfort and don’t want to lug all our camping gear up to the Lakes, so took up the Glamping option of Camping pods instead of tents. These are wooden cabins with a porch and windows to make the most of the Lakeland views, plus come with electricity, heating and lighting. Well worth it.

With sunny weather most of the time, those that attended headed off into the fells including Scarfell, Scarfell Pike, Wallbarrow Crag and Gorge plus Lingmell. Additionally some members visited the Napes climbing area on Great Gable. Here they climbed the Needle Ridge a 330ft multi-pitch mountaineering route and climbed two routes on Kearns Knott and ascended the famous Napes Needle. This was followed by evening trips down to the local pub at Wasdale Head and a BBQ at the Campsite. 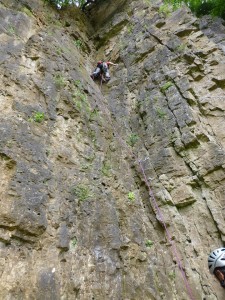 June 2014 – A glorious weekend of sunny weather was in store. The campsite, Rushmere Farm , Wye Valley., hasn’t been used by the club before, but it proved to be very acceptable with flat pitches and an excellent toilet block. Over the weekend MKMC members climbed at Symonds Yat & Staple Edge Quarry while others went walking, cycling and canoeing along the River Wye. 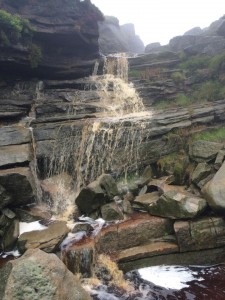 July 2014 – A large number of MKMC members turned up for this meet at Hardhurst Farm Campsite in the Peak District for a weekend of walking and climbing that also included more importantly a BBQ to celebrate Mark & Melissa’s wedding. 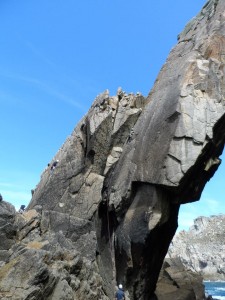 August 2014 – A small group of dedicated MKMC members took part in this adventure and so it was that seven keen rock climbers set sail from Ilfracombe on the MS Oldenburg (aka “Old and Buggered”) for Lundy.

The first destination was Landing Craft Bay, and Shamrock (VS) looked like a good warm-up, so they abseiled in. The problem was that it was high tide and they couldn’t get to their chosen climb, so option two, Cow Pie (also VS) was selected. It was a lovely climb but with a sting in the tail. It finished over steep, loose soil and rocks, and coupled with the fact that it started to rain made the exit truly horrendous. Happily everyone made it out without incident, and reached the camp-site well after sun-set. For the rest of the week the pattern each day was very similar. After breakfast they would pop into the shop for supplies and then head off to their chosen crag. Finding the climbing area was often quite time consuming, and then they would set up an abseil and hope that they were in the right place. In the evening it was back to the camp-site or Marisco Tavern for dinner and a pint. 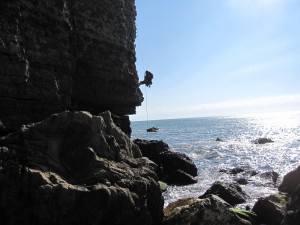 September 2014 – It was an ‘Indian summer’ weekend at Tom’s Field Campsite nearSwanage and everyone was careful not to get sunburnt. Adventures were had and everyone had a story to tell! Hopefully Swanage will become a regular destination for the club. 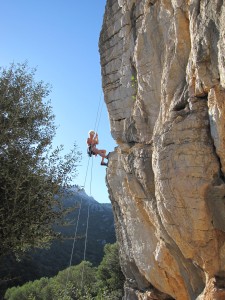 October 2014 – The party flew to Cagliari in Sardinia and they stayed in La Caletta, their base for the week.The Crags they visited during the trip were Calamosca, La Caletta, Cala Fuili area near Cala Gonone, Cala Spinosa, Gole di Gorroppu, a local crag at Siniscola & Buchi Arta.The weather was perfect and Sardinian rock hasn’t suffered from the polish that so many other areas have succumbed to, but having been used to temperatures in the low teens in the UK it was quite a shock to the system to be climbing in the low 30’s. If you haven’t visited Sardinia then it’s definitely an area that should be on your hit list. 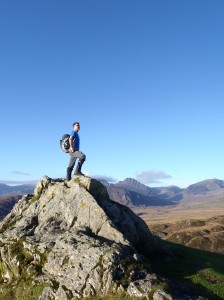 November 2014 – For this meet the club stayed at Bryn Brethynau Climbing Barn neat Capel Curig in North Wales owned by North London MC. The weather was good so the 18 members that attended headed off into the hills to do a wide range of activities including scrambling up Moel Siabod’s Deaer Ddu Ridge,climbing the classic route “outside edge”, walking in the Carneddau and one member doing the Snowdonia 3000ft mountains over the weekend (including an overnight camp on Snowdon’s summit). 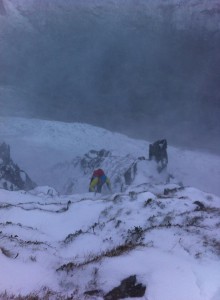 December 2014–The club’s Christmas meet this year was held at Brathray Exploration Group Trust Hut in Lake District near Ambleside. The Friday and Saturday were cold and snowy allowing MKMC members to get the first taste of winter in the fells of the Lake District . Several hills and walking routes were taken around Langdale including the Pike of Blisco & the Crinkle Crags plus a brave team who went to Paval Ark and tackled “the Buttress of Doom” as the called it in very dodge snow conditions. Saturday evening we had an excellent Xmas dinner cooked by Kent who yet again surpassed himself. Sunday saw the return of the wind &rain to batter the Lakes despite this a hardy bunch did a circuit of the Old Man of Coniston.

In addition to above MKMC members have ranged far and wide with trips to Ireland’s Macgillycuddy Reeks, the European Alps, the Highlands of Scotland, bouldering at Fontainebleau in France and night climbing in Qatar plus a whole summer of day trips to the Peak district for climbing.

The Hut Meets for early 2015 incl. January to Crianlarich in Scotland, February to Llanberis, North Wales and March to the Wayfarers Hut, Lake District. Followed by Camping Meet in April to the Wye Valley, May to Pembroke, South Wales, June to Wasdale in the western Lake District, July a first trip up north to Northumbria, August back to Snowdonia in North Wales and September a return to Swanage on the South Coast. The October meet will be an overseas trip to Spain or similar. Then a return to Hut Meets with trips in November to Snowdonia and the Lake District for the Xmas Meet in December (hopefully with Kent cooking again).