Kent and I were the first to arrive at the hut on the friday afternoon, where we set about getting settled in and making the fire for the lounge/dining area of the hut.  All the other members arrived later and we all had a chance to catch up with members we know well and to welcome newer members and discuss plans for the following day before bed. 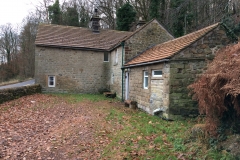 Most people were up fairly early getting themselves ready for the day ahead in the beautiful, if quite wet peak district.Kent and I drove out to Snake Pass and walked up to Kinder Scout and then stopped on route back at the Snake Pass Inn for much needed refreshment.

Stuart, Jason and Alan headed for the hills to the East of Ladybower reservoir and did a circular route over the top, past Dovestone Rocks, down to Ladybower Reservoir and Upper Derwent Reservoir, and then back over the Moor. Gillian and Adam climbed Mam Tor then went for a walk around Castleton and visited Treak Cliff Cavern. Bob and Sophie went bouldering on the Pinnacle Boulders until after dark. Other members were either walking or climbing in various locations. 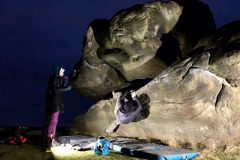 When we got back to the hut and got cleaned up myself, Alan, Jason and Stuart under supervision of our head chef Kent started cooking an epic xmas dinner (3 courses), which as ever was delicious and everyone was truly stuffed.

The rest of the evening was spent having a few xmas drinks to xmas songs and talking about what we had done that day and our plans for the next day and catching up with everyone.

After quite a lot of cleaning up from the night before, everyone packed up and either made tracks home or decided to stay local. 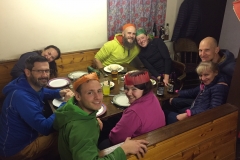 Stuart, Jason, Nick, Zoe and Alan decided the rock was calling even though it was a very chilly day, so they headed off to Burbage North. But there was sunshine and between them they climbed more than half a dozen easy routes. Bob and Sophie went bouldering in the Dowhill Racer and Pinnacle areas. Gillian and Adam drove across Snake Pass and went for a short walk. 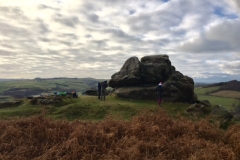 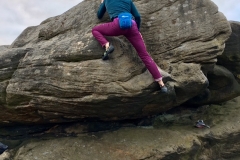 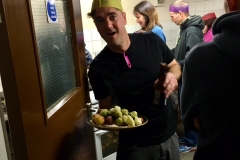 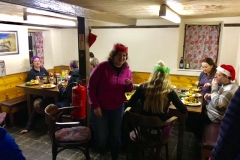 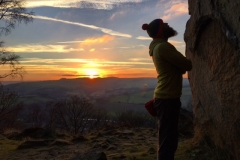 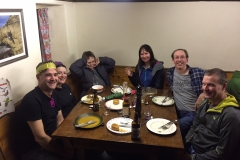 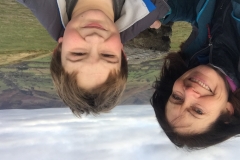