Jason and Alan set off early morning arriving in time for lunch. It took a little exploring to find the hut, which was a 15-minute walk from where the cars were parked. They decided to get the wood burning stove going to make the hut nice a warm for the rest of the party. Sufficient to say the smoke alarm was given a through testing! Alan hadn’t come across a wood burning stove with a flue damper – well that’s his excuse! After a late lunch they went for a leg stretch and exploration of the quarries to the West of Dinas Mawddwy. Andy and Rob, who were heading into the village to eat in the Red Lion, met them before they had returned to the hut. Difficult decision taken all four headed to the pub to eat. For future reference the Red Lion does really good food; the lamb and leak pie comes highly recommended. While enjoying the warmth of the wood burning stove, Peter turned up completing the party. 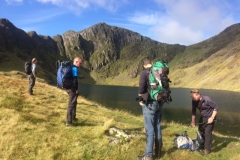 A walk on Cadair Idris was planned from the South side starting at Minffordd. The initial route out of the car park soon had us walking up steps through the wood, hard work but you do gain height quickly. A twice-crossed bog did give a brief rest overlooking Llyn Cau, before the ridge leading up Mynydd Pencoed. A final drop down to the col at the top of Craig Cau before the final pull up to Pen Y Gadair, the top of the Cadair Idris range. 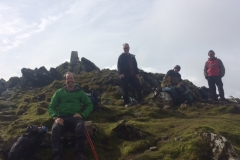 We stopped for lunch looking North toward Dolgellau in the distance. One thing we all noticed was the lack of people, compared with the ‘honey pots’ of Snowdonia and the Ogwen Valley. After lunch we headed along the wide grassy ridge to Mynydd Moel, which overlooked the Cyfrwy Arete. Which is 300m of climbing and scrambling – an ideal mountaineering day but it requires a long spell of dry weather. Next time.

We had just crossed a style when the light rain got heavier and then turned to hail. Time for waterproofs. The decent from Mynydd Moel brought us back to the path from the car park and the tea room, for a cuppa and Bara Brith.

The food was so good in the Red Lion that it enticed us all back for a second meal. On arrival we found an obstacle course of old Sunbeam motor cycles surrounding the pub. Dinas Mawddwy was on the original test route for the more sporting Sunbeam models a 200 mile round trip. Their owners lovingly look after then now and do the trip in two days!

Peter was off early to follow another passion, surfing. The rest of us headed up Cwm Cywarch to the start of the walk. The path up the side of Pen yr Allt Uchaf was so much easier on the legs than yesterday’s steps. 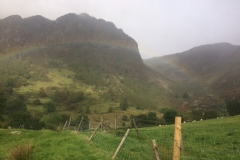 On the climb to the summit of Drysgol the rain/mist came down and it was a return to the waterproofs. The mist made navigation challenging, however, OS Locate and OS Maps made things very straightforward. Two worthy downloads to supplement conventional navigation techniques. The summit of Aran Fawddwy brought a short rest for a drink and some food as well as donning extra clothes. The col between Aran Fawddwy and Glasgwn was a bog. Well, more like a swimming pool with some grass tufts thrown in. In places the path was wooden planks which sunk just below the surface as you stood on them. Wet boots offer no grip on wet wood. Time to move very slowly indeed. On more than one occasion there was almost a moment when one of us, well Alan and Jason, very nearly went in. One pool was so deep that Jason’s walking pole didn’t touch the bottom before its handle touched the surface of the water.

It was a relief to hit the ancient right of way and follow a more solid path back down to the cars.  A good weekend in a quieter part of Snowdonia.