This slightly longer meet based itself at the Alex Mac hut in Onich at the entrance to Loch Leven, 20 minutes from GlenCoe and Fort William.  It’s a great BMC/SMC hut which is available for clubs and individual members to book with good facilities and heating!  It’s named after Alex MacIntyre, a pioneering big wall mountain climber who lost his life aged 28 on Annapurna.

Lizzy and Peter headed West for better weather and climbed Beinn a’ Chaorainn via the grade 1 scramble on its east ridge.  A fine day even with the drizzle on the way down.  Lizzy’s first Munro and first scramble!

Lizzy and Peter headed west again for some sunshine climbing a couple of routes at Creag Dubh near Newtonmore.  Great views to the Cairngorms.

With the arrival of Andy, Aidan, Paul and Amber the group headed up Buchaille Etive Mor either to do Curved ridge or a climb on Rannoch Wall. 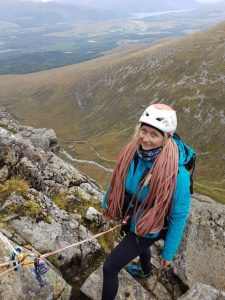 The rock looked too wet for “proper” climbing (as Andrew would call it!) so we completed Curved ridge which is a classic grade 2 scramble up the (apparently) sheer E/SE side of Stob Dearg. Just so we didn’t take our racks for a walk Andy and Peter roped up and led the hardest section to take an interesting line. 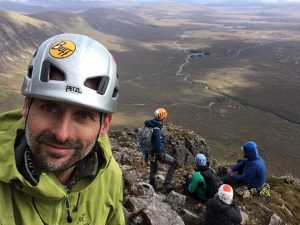 Andy, Amber and Paul decided to walk the rest of the ridge in the wind and rain to the other Munro but Aidan and Peter took the easy path down the Coire and back to the hut nice and early for a cup of tea! It has to be reported that Amber fell in the river in the Lairig Gartain :-).

Bad weather and we all (including Kathy who got the sleeper up) went climbing at Pol Dubh crags in Glen Nevis. Peter ran a “try leading with a safety rope” session on one route while Andy, Aidan and Paul tried another route which was best described as “soggy”. Scottish cragging! However in a break in the showers we had a great walk up Glen Nevis, 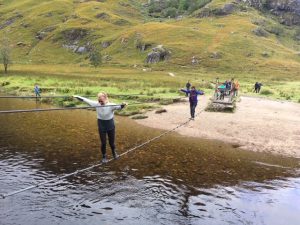 enjoyed the Steall bridge and saw Steall waterfall in full spate. Kathy and Peter persevered to do a good first pitch of a Severe on Poll Dubh in the afternoon and found some crag swag. It looked disturbingly like someone had abseiled off a single no.9 nut and a runner!

After much much discussion on the weather forecast the group headed up to climb Castle Ridge on the North side of Ben Nevis. The rock was pretty wet which made the whole ridge take over 4 hours bottom to top including 3 pitched sections and some exciting leading for Peter and Aidan. 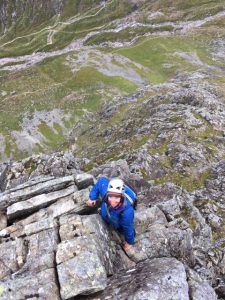 However the crux section was a fantastic exposed little climb and the rain mostly held off until the summit of Carn Dearg (so many in Scotland!) was reached. The descent of the zig-zags (a first for many) was interesting with the volume of tourists and race contestants. The day finished with some river hopping and bog trotting to get back to the guide’s car park. Everyone was very pleased to have got a big mountaineering route on the Ben under their belts. The weekend finished with Pizza and beers back at the hut chatting to the other residents who were entering the Glencoe Skyline race the next day.

This entry was posted in 2018 and tagged 2018. Bookmark the permalink.