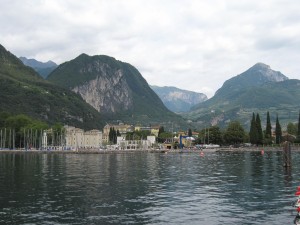 Friday 21st June. We had an early start as our departure time from Luton was 07:10. At the airport it seemed to take for ever getting through check-in and customs. As usual I set off the alarm going through customs, and the official seemed to take great delight in giving me a full body search; but finally the eight of us made it onto flight 2283 to Milan Malpensa.

At the other end my stress level was sent soaring when my bag didn’t appear on the airport carousel. Fifteen minutes after everyone else had retrieved their bags I was reunited with my gear and off we all trundled to collect our cars.

The journey to Arco was hot but uneventful, and we finally arrived at the camp site – ‘Camping Zoo’ just after 14:00. Our accommodation was two mobile homes with all mod cons including a bathroom, kitchen area and beds with bed linen provided. There was a covered patio area, ideal for having breakfast or just lounging around.

MKMC were in Arco to climb, so once ensconced in our mobile homes we headed off to Massi Di Prabi to savour the delights of what was on offer. The crag was within easy walking distance of Camping Zoo, and routes were quickly “devoured”.

At 20:00 we headed back to our new homes to freshen up before heading off to the pizza restaurant “California” that we had passed just 100 metres from the camp site. 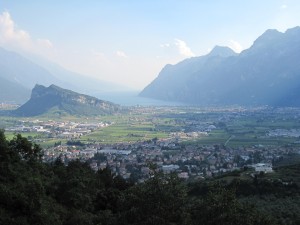 Saturday 22nd June. The day was a scorcher and plenty of water was drunk and sun cream applied. This was to be our one and only multi-pitch route of the week; destination, Parete Zebrata. Wayne and Alex opted to do Gabri Camilla (6b); Alan, Ian, Bob and Iain, climbing as two pairs, set off to do Rita (5c, 16 pitches) a little to the right of the other team, while Ant and Lorraine did 46° Parallelo. All successfully reached the top, and then it was off to a local cafe for refreshment.

The evening followed the usual pattern – shower and off to pizzeria California. At the end of the evening as the group returned to Camping Zoo loud music could be heard, and this was the catalyst for everyone except Ant, Lorraine and Alan to head off in search of further entertainment. At around 3:00 in the morning the revellers arrived back at Camping Zoo.

Sunday 23rd June. Ant and Lorraine were keen to do a via ferrata and headed off to Riva del Garda for the day. There were a few hang-overs amongst the rest of the group, and when we finally got off we walked to a local crag – San Paolo. The routes were challenging, and by early afternoon we returned to the camp site for lunch, a dip in the pool and a siesta.

By late afternoon it was time for a spot more climbing, and this time we went to Muro dell’Asino, ten minutes drive away. We stopped climbing at dusk, and as it was getting late we went straight to the pizzeria.

Monday 24th June. We woke to the pitter patter of rain on the caravan roof, and after the heat of the past few days, the temperature was significantly lower. It was the last day for the short stay team, and we all headed off to Arco. First the gear shops needed exploring (which was almost every other shop) and when funds were exhausted we headed up to the castle for some fantastic views over the town and further afield. By early afternoon Ants group needed to set off for their return journey. Good-byes were said and once departed the long stayers headed off to Massone where they climbed until dusk. 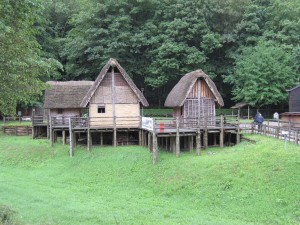 Tuesday 25th June. The day dawned dry and bright and as we drove North to Val Lomasone (550m altitude) there was a noticeable cooling of the temperature. We had the crag virtually to ourselves, and with minimal polish climbing here was a delight.

Wednesday 26th June. Again, perfect weather. We drove to Preore (the crag with the wooden sculptures), a 40km drive from Arco.

Thursday 27th June. Waynes last day as he had to be back in England for his graduation on Friday. We spent the morning in Riva del Garda sight-seeing. Wayne needed to be at the train station in Rovereto by 13:00 hrs, and once he was safely delivered the remaining three of us (Alex, Ian and myself) headed off to Noriglio 10 km to the East.

It should have been easy finding the crag, but once on foot we somehow managed to get lost. After meandering around the area for about an hour we arrived back at the car. Our second attempt was more successful, and after just 10 minutes we were at the crag. We got a number of routes done before rain stopped play in the early evening. It was the beginning of a torrential storm which lasted all night and into the morning of the following day. That night the three of us dined indoors at the pizzeria California; the first time that we’d had to take cover all week.

Friday 28th June. It poured all night and in the morning we decided to pack and take a leisurely scenic journey over the mountains back to the airport. We stopped at Breno for a late lunch and had a chance to visit the castle, eat ice creams and have a wander around the town. With plenty of time to spare (fortunately) we set off on the final leg of our journey, only to be stuck in traffic for several hours on the outskirts of Milan. We finally made it back to the airport, dropped off our hire car and even had time for a cappuccino before catching our plane back to England.

It was an excellent trip. Plans for 2014 are already under way!