You know what they say about bank holiday weekends (awful weather). As it turned out the weather was OK, but someone did have some bad luck!

Heading North from MK on Friday the motorway traffic was really heavy, and it was 5 hours later that we finally arrived at our accommodation for the weekend. Emma had booked the local village hall at Kirkby Malham, just a stone’s throw away from Malham.

Saturday dawned with an unexpected golden glow in the Eastern sky. The consensus from the group was to visit the limestone paradise of Malham Cove, just a short hop down the road. We climbed on the left wing for a while before heading over to the right wing. As the evening drew on cream teas were on everyone’s mind, but calamity! Nowhere sold cream teas and over-priced alternatives were purchased. A rather disgruntled group of climbers headed back to The Cove to try a spot of sport climbing. While we were struggling to get off the ground attempting “Begozi and the ledge lizards” F6a+, Steve McClure was successfully redpointing a new route, Batman F9a+. 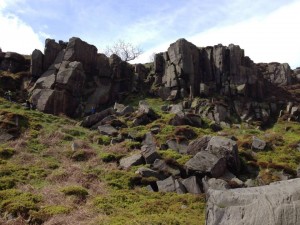 Sunday – off to Rylstone, a gritstone crag and a complete change of character from yesterday’s limestone. Once we’d located the parking spot it was then a 30 minute walk across the moors. The scenery was wonderful, as was the climbing. Stuart used his shiny new equipment and did his first ever lead (President’s Slab) in excellent style.

Monday – Having packed and left the accommodation looking spick and span we were down to just 5 climbers (Bob, Stuart, Alan, Ian R and Ingo). The consensus was to head to Rocky Valley, Ilkley. Alan was keen to lead “The Flake Climb” – a top 50 climb – but as there was already a team on it he went off to do “Three Slabs Route” just to the left. Ian hung around, and as soon as the other team had finished started up “The Flake Climb”. Disaster – A huge block within the rock face itself was dislodged and fell on his arm pinning it, and Ian, to the rock. It was obvious that there was little we could do and the emergency services were called.

Once Ian had been rescued & air lifted off to hospital our appetite for any further climbing was squashed, and we headed off to Leeds General to visit the patient. Fortunately Ian was in good spirits and no serious damage was evident. After an overnight stay in hospital for observations he was discharged the following morning.