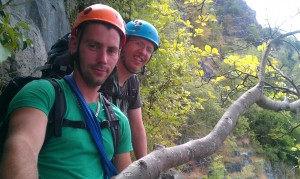 Friday 26th: Stuart, Kent, Alkesh and Glen did a couple of routes at Shorn Cliff in the early evening: Stuart led Acoustic (VDiff) and Gargoyle (HS) with Alkesh; Kent and Glen also climbed Acoustic. It was Stuart’s first time leading on limestone and despite the guidebook suggesting that the only protection needed was a set of small wires and a few slings, he found himself cursing the fact he’d left his hexed and biggest cams on the ground for Acoustic. Needless to say, he racked them and used them on the next route. Dan, Chrissy and their dog Mollie, and Ambrose and Rebecca went for a short walk early evening to Devil’s Pulpit and back.  Dan and Chrissy had arrived on the Thursday, and went canoeing earlier on the Friday. Everyone arrived by sundown, and Patrick and Lynne joined us for drinks around the fire in the centre of the tent circle, after various food escapades. 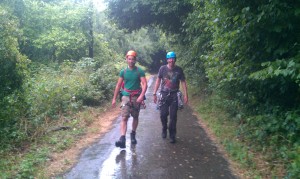 Saturday 27th: Jason, Gavin and Stuart went over to Wintour’s Leap to have a go at a multi-pitch route; they chose Corner Buttress Route 2 (VDiff). They accessed the base of the crag via what the guidebook called the easy way down – not that easy in places, especially with a bag full of gear.  Once at the bottom, they found the start of the route with a little help from some local climbers and set off upwards again.  The climbing would have been easy had it not been for the fact that both Jason and Stuart had packed far more gear than they could have ever sensibly used.  Despite that, they made steady progress alternating leads, with Gavin seconding every pitch. Once back at the top, they decided to venture just round the corner to Ban-y-Gor for a bit of sport climbing.  Without photo-topos the guidebook was almost useless so they took some advice from a group already climbing and did a couple of short-ish 5/5+ routes before Gavin set his sights a little higher and they headed around the corner to try Join the Union Jack (6b+).  Gavin tied on and right on cue the heavens opened.  Fortunately the route had a fairly big roof only a few metres up, so Jason and Stuart stayed relatively dry, but as soon as Gavin reached the second bolt he was faced with a hard pull up on a sharp flake in torrential rain.  He took a couple of falls working the move before a short rest and a final pull to make the move before a comparatively easy finish. Stuart tied on to second the route and immediately discovered why it was a 6b+.  The holds were small, sharp and usually just out of reach for him.  After a couple of falls they decided to call it a day and headed back to get changed into some dry clothes before meeting the others at the pub for dinner. Meanwhile, Ambrose, Rebecca, Kent, Glen, Dan, Alkesh and Patreick went climbing just nearby; Ange, Monica, Chrissy and Lynne watched – and now might start some indoor climbing as a result. They all then went to the pub as rain stopped play early afternoon! 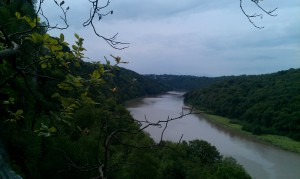 Sunday 28th: Sunday was altogether more relaxed. Stuart, Jason, Ambrose and Becky went for a short walk along the river while the others went to get lunch. Everyone then went paddling downstream in canoes and kayaks on the River Wye for about two hours, including a break about half way for ice creams.