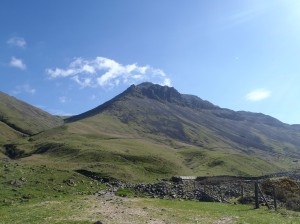 This May club’s meet was at the beautiful National Trust Campsite which nestles under the Scafell mountain range at the head of Waswater, the deepest lake in England, with its distinctive Nordic character and the pyramidal peak of Great Gable reflected in its waters. A few of us decided that we wanted a little more comfort and don’t want to lug all our camping gear up to the Lakes, so took up the Glamping option of Camping pods instead of tents. These are wooden cabins with a porch and windows to make the most of the Lakeland views, plus come with electricity, heating and lighting. Well worth it. 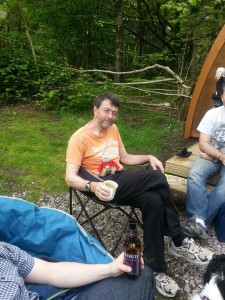 Thursday – First to arrive was Chris & Martin who drove up early, arrived at the campsite first, put their gear in their Pod and then went for a walk up Scafell Pike. Later in the afternoon Kent, Ang, Diane & Andy, unpacked their gear into their Pods before meeting up with Chris and Martin for a trip down to the local pub at Wasdale Head to celebrate Kent’s Birthday with a few beers and dinner. Much later in the evening Alan, Dan and Molly the dog arrived, unloaded and set up their tents in the dark.

Friday – After breakfast Alan, Andy, Kent & Dan plus Molly headed out from the campsite and climbed up to Mickledore on the Scarfell Massif to do a circular walk via Foxes Tarn and the top of Scafell coming back via Burnmoor Tarn. At the same time Chris & Martin headed off for a big day walking around the Mosedale Horseshoe via Kirk Fell & Pillar. Meanwhile Ang & Diane opted for a bit of glamping at the campsite and enjoyed the sunshine and peace and quiet. Shortly after people started to return to the campsite Melissa & Mark arrived to join the group closely followed by Mac. 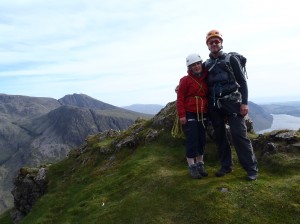 Saturday – Another sunny day saw Andy, Kent & Ang heading up the valley towards Styhead Tarn and onto the Great Gable climbers traverse path to The Napes climbing area. Here they climbed the Needle Ridge a 330ft multi-pitch mountaineering route – Ang’s first outdoor climb. After difficulties with getting off the route and the descent across a lot of scree they were late back after a very long day (12 hours). Dan & Molly walked with Andy, Kent & Ang to Styhead Tarn before heading up the corridor route to the top of Lingmell and then returning to the campsite. Alan & Mark also went climbing completing two routes on Kearns Knott and climbing the famous Napes Needle in The Napes climbing area on Great Gable. Chris & Martin walked up Great Gable via Styhead Tarn and Melissa and Mac completed a walk up Scafell Pike. Diane carried on glamping at the campsite and got a bit sunburnt.

Once everybody had returned safely from the days adventures in the hills around the Wasdale valley they spent the evening at Mac’s tent for a BBQ and a few drinks plus a few tales of the days events. 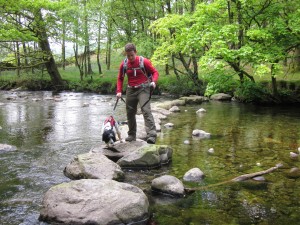 Sunday – Another fine start to the day but with bad weather forecast for later in the day, Chris & Martin headed off home early followed by Kent, Ang, Diane & Andy who returned home after breakfast at the pub. Mark & Melissa headed off to explore the Ravenglass area before returning home, Mac went for a local walk and Alan, Dan & Molly headed over to Seathwaite to do a walk around Wallbarrow Crag and Gorge before returning home.

Thanks to all that attended the meet: – Kent (Organiser), Ang, Alan, Andy, Diane, Chris, Martin, Mark, Melissa, Mac & Dan plus Molly the dog.