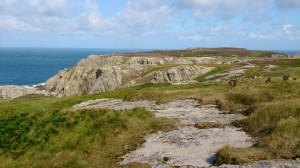 A small group of dedicated MKMC members took part in this adventure. Alan, Jason, Stuart, Ian R and Anna were booked for the week; Gillian and Adam for 4 days. As one member of the team said: “It’s a trip for proper climbers that don’t shy away from placing their own gear. There are climbs of all grades, and the place does look pretty special!” 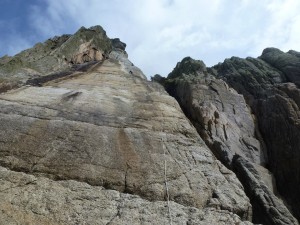 And so it was that seven keen rock climbers set sail from Ilfracombe on the MS Oldenburg (aka “Old and Buggered”) on Saturday morning. The party should have included Mark and Melissa, but circumstances conspired against them and they were unable to make it. The crossing was not without interest – a RAF helicopter rescue team did a practice rescue from the boat which was very exciting to watch. On shore there was a bit of a wait for luggage, but eventually it arrived, and once the tents were pitched on the island’s campsite, five of the group thought they’d get a climb in before supper.

The destination was Landing Craft Bay, and Shamrock (VS) looked like a good warm-up, so they abseiled in. The problem was that it was high tide and they couldn’t get to their chosen climb, so option two, Cow Pie (also VS) was selected. It was a lovely climb but with a sting in the tail. It finished over steep, loose soil and rocks, and coupled with the fact that it started to rain made the exit truly horrendous. Happily everyone made it out without incident, and reached  the camp-site well after sun-set.

For the rest of the week the pattern each day was very similar. After breakfast they would pop into the shop for supplies and then head off to their chosen crag. Finding the climbing area was often quite time consuming, and then they would set up an abseil and hope that they were in the right place. In the evening it was back to the camp-site or Marisco Tavern for dinner and a pint. 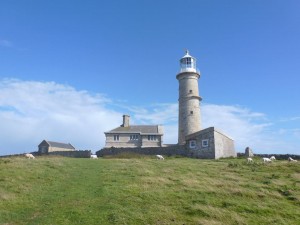 On the last day Alan, Jason and Stuart went for a walk collecting ‘letter box’ stamps and searching out the flora and fauna. There are twenty five stamps in total hidden around the island. Alan and his team collect fifteen but were outshone by Gillian and Adam who collected twenty. Anna and Ian spent their last day at Devil’s Slide. Earlier in the week Anna had seconded this classic route and was keen to lead it – which she did in style. In the ocean the inquisitive grey seals were a joy to watch, and they would often appear from nowhere to study the climbers every move.

Alan’s footnote: It’s fifteen years since my last climbing trip to Lundy, but with so much still to do I won’t be leaving it quite so long before my next visit.