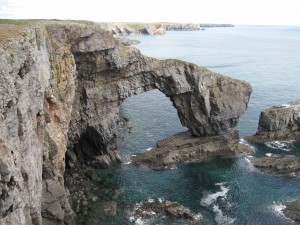 The advanced party, Alan and Jason were first to arrive on Wednesday evening.

On Thursday morning, in glorious sunshine, they travelled the 3 miles from St. Petrox campsite to Bosherston to enjoy the climbing at St. Govan’s Head. Old favourites such as Army Dreamers, Front Line and Chieftain were soon ticked. Towards the end of the day, as Alan was topping out on Tactician, Mark and Melissa appeared, 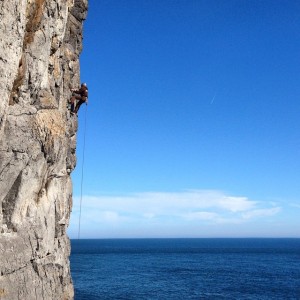 refreshments for the climbers in hand. Back at the camp site Frazer and Jason W arrived, having travelled down during the day from Cleveland.

On Friday the weather was again very pleasant. Range East was closed for army manoeuvres, so St. Govan’s Head was once again the destination. Two climbs which both teams did were ‘Rear Wind’ (HVS) and ‘Europa’ (HVS), both routes having bags of ‘character’. During the course of the evening and the following morning the rest of the group arrived. 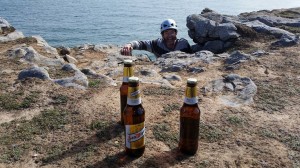 Saturday, and the majority of the group spent the day in the area between Saddle Head and Stennis Head on Range East. Two potential new members, Hannah and Lisa, joined the group for the morning and climbed a number of routes. More classic lines were bagged by everyone. 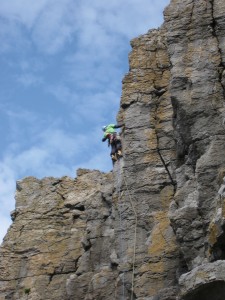 There was a break in the good weather on Sunday morning and the group split. One party went to Tenby for breakfast while another went for a stroll around the Lily Ponds at Bosherston. By the afternoon the sun was out again. Crystal Slabs and Mother Carey’s Kitchen were the destinations. In the evening Hannah and Lisa hosted a gathering for everyone in their palatial tent.

Monday was a slightly breezier day, but the sun was strong and those without sun cream on got burnt. Some of the party made an early start back to MK, others stayed on until the afternoon or evening and four members stayed on to climb the following day. Sadly there was a fatal accident at the Crystal Slabs on the Monday afternoon in the area near where Bob, Sophie and Alex were climbing. A reminder to us all not to take our own safety for granted when climbing.