Overall it’s been another very good year for MKMC with lots of activities undertaken across the year and good participation from the club’s members. We’ve travelled far and wide across the UK and we look forward to seeing where next years meets will take us.

February 2015 – This trip was to Chester Mountaineering Hut, Llanberis, North Wales. Snowy walks on the Glyders and Carneddau. Getting blown off Snowdon.

April 2015 – A visit to Rushmere Campsite in the beautiful Wye Valley. Perfect weather and good climbing…..apparently!

May 2015 – May club trip was to St. Petrox Campsite in Pembroke, South Wales

June 2015 – The club’s meet was a return visit to the beautiful National Trust Campsite which nestles under the Scafell mountain range at the head of Wastwater, the deepest lake in England.

August 2015 – A first trip for the club to Northumbria to try the crags of the North East of the UK. Alnwick Rugby Club Campsite

November 2015 – Visit to the Gwydyr MC Hut in Capel Curig, North Wales during a weekend that saw 10 inches of rain fall in 12 hours. Wet and wild, scrambling and walking in the welsh mountains. 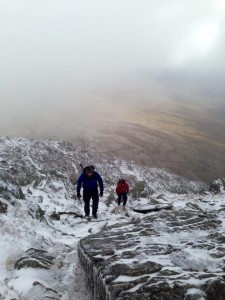 Interspersed in all of these we’ve had a series of day walks organised to the peaks and local venues which have been well received and well attended. We’d like to thank Steve Scott & Stuart Riches for their efforts on these giving up their free time to organise and lead these walks and also Andy Russell for the same but he’s a committee member so gets little choice!!

There’s been a surge of new members recently which is excellent and they’re already getting on to the meets and being involved in the club. Really pleased to see the email address being put to good use. Just recently 2 ladies got in touch one starting and one re-starting climbing which almost brought a tear to our eyes as that’s exactly what the club and the email is here to do.

It’s been another record breaking year for the club with members up to 97 to date and still a high interest which can only mean good things for 2016. It’s been a great year for our club members who still seem to love there time with the club and promote our ethics of getting out there and enjoying themselves with like-minded people. They continue to spend time with good friends but also find new ones which we wouldn’t normally get the opportunity to do.

The committee can only reiterate the point made at the last AGM that you can only get out of the club what you put in, the club exists for all of us with a valued few trying to pull the strings for everyone’s enjoyment. So it’s worth looking at the website again and the club’s facebook page to remember what a good year it has been.