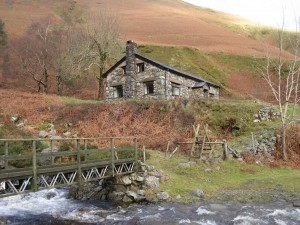 It was cold and the wind was howling on top of Aran Fawddwy as Alan and Jason forged ahead with their walk. The ground underfoot was very boggy, but the Snowdonia National Parks Authority had thoughtfully laid wooden duck boards to ease the way. However, over the years, these have weathered and were now like sheets of ice making progress precarious. They were the advance party having arrived at Bryn Hafod Cottage at the foot of Cwm Cywarch on Friday morning. Once back at the cottage the fire was coaxed into life and through the course of the evening the rest of the members and friends of MKMC arrived. 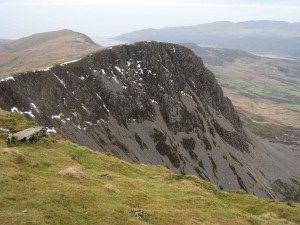 Bryn Hafod is the club hut of The Stafford Mountain Club and lies beneath Cwm Cywarch, home to some classic rock climbs such as Doom and Will-o’-the-Wisp. It is well appointed and sleeps a maximum of 18. The lounge is comfortable and has an open fire, and kindling and coal is provided.

Seven members headed off to walk the Cwm Cau Horseshoe, Cader Idris. As the party gained height they could see that the summit was in the cloud, but by the time they got there the mist had cleared and there were glorious 360 ͦ views. To the West they could clearly see Cyfrwy Arete, a majestic classic climb where other members of MKMC were having their own adventures. After a brief lunch stop it was on to Mynydd Moel and then the steep descent back to the cars. 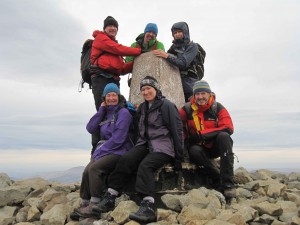 Another group climbed to the summit of Aran Fawddwy from Bryn Hafod. Any snow that was still lying had now turned to slush, and conditions under foot were wet to say the least. The views from the summit were magnificent – well worth the effort to get to the top. The team continued their circular walk but didn’t quite make it back to the cottage before the rain set in.

The rest of the party had Cyfrwy Arete in their sights. Some members set off early and were up and off the mountain before dusk, others left a bit later and were benighted, although they did make it safely back to the cottage later that evening. Everyone in the climbing party agreed it had been an epic day. 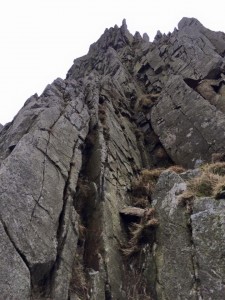 In the evening they had the Burns night celebrations and enjoyed haggis and all the accompanying veg followed by raspberry cream and shortbread. Burns poems were read and copious amounts of whisky were put away. The late comers eventually arrived back, a little wet but in high spirits, ready for their saved Burns fare.

Sunday was a day of cleaning and packing, then a final adventure and home. Our friends from the North (Fraser, Jason W and Martin) had brought their mountain bikes and did some MTB trails at Coed y Brenin. Another group set off to walk part of the Mawddach trail from Dolgellau and yet others did a circular walk from Penmaen pool. Bob and Sophie’s party went running first over the mountains and were the last to leave the hut.

All in all, a very successful weekend.