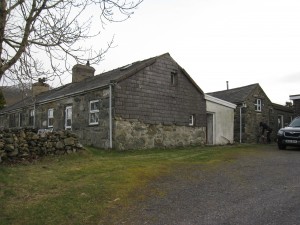 Shortly after 8 o’clock Friday morning, six MKMC members were on the road. There was a planned gathering at Montford Bridge Cafe near Shrewsbury for a late breakfast; then on to their destination, the Wellingborough Mountaineering Club cottage at Bethesda, North Wales. As the mountains came into view, it was obvious that there was a fair covering of snow on the higher levels, much to the consternation of some members of the group who had left their crampons and ice axes in Milton Keynes. 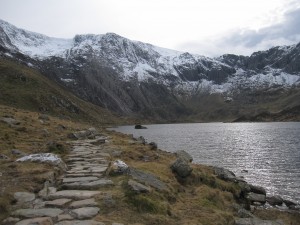 arrived and settled in at the cottage they set off for a recce around Llyn Idwal. They ventured above the snow line near Devil’s Kitchen, but without crampons it was very slippery, and after a short distance they retraced their steps back to the lake. They spent the evening keeping warm around the gas fire and welcomed later arrivals.

Saturday looked promising and club members set off in different directions. One group did a circular walk from Ogwen Cottage to Capel Curig via Y-Foel-Goch and back along the old drovers road. Alan M. and Jason went to the slate quarries and did Snakes and Ladders (and Tunnels). Bob and Sophie went for a run, and later Louie joined them and they went bouldering near Caseg Fraith in the Ogwen Valley. In the evening most of the group went to Plas y Brenin at Capel Curig to dine and listen to a short lecture by Rachael Crewesmith entitle “A toolkit for Adventure”. 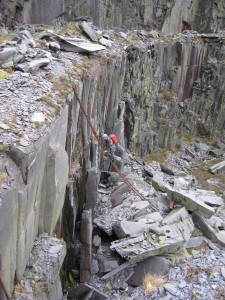 Sunday was dry, calm and reasonably warm. Andy R. Alan W. and Gillian went walking in the Ogwen Valley. Alan, Andy W. and Jason went back to the slate quarries to climb at The Sidings. Andy W. climbed all the routes really well even though he hadn’t been climbing for a couple of years. Bob and Sophie went off in search of more boulder problems.

A fantastic weekend was had by all. Next month the club starts its camping season with a trip to Portland.