A trip to Yorkshire – Stuart Riches 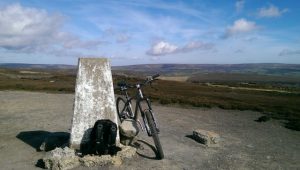 This became a pure mountain biking trip because of a shortage of, well climbers. After a comfortable nights sleep at the Bungdale Head campsite I peddled off down (and up, and down again) into Helmsley to meet with local snowboard and now mountain bike legend Phil Lee. We had agreed to start with a loop from Helmsley described in the Vertebrate publishing guide, which fortunately the towns only bookshop had in stock and we set off suitably well equipped. The ride was quite long, challenging and took us through some beautiful countryside, but somehow, perhaps on account of the at times awkward route finding and less than difficult descents we returned to Helmsley not quite satisfied. After a refuelling pint we agreed to finish off the day with a spin around Dalby Forrest where I tried to keep up with Phil on the mix of man made trail and sneaky off piste. When my legs (not Phil’s I should add) were spent we made it back to the campsite a whole lot more satisfied than we earlier had been. 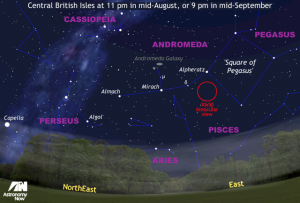 This part of the world is favoured for its “Dark Skies”  http://www.darkskydiscovery.org.uk/ and handily I not only had a 150mm refractor in the back of my car but we also had just about enough daylight left to it set up, whilst leisurely enjoying a little more refreshment. September is a good time to look for Andromeda, one of the more easily observable galaxies and sure enough after a bit of poking around I’d managed to locate it roughly above Mirach a star in the Pegasus constellation. 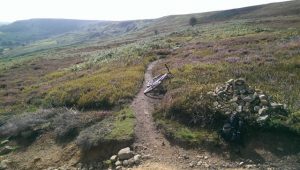 On Sunday Phil was unable to ride but he had pointed me at another route in the guide, this time a little further east. Known locally as the “Gillamore loop” it actually starts in the tourist honey pot Hutton-le-hole. For anyone who can afford the car park it is well worth a visit. This route ticked all the boxes, after chocolate box sightseeing it is up onto the moor with a pleasurable fire road to high point Rutland Rigg. Great views. And then down to the valley again by a long, flowing and sometimes testing single track as good as any I’ve previously enjoyed on Wales or the Peak.

So a somewhat unusual climbing trip, but a fine weekend all the same and ultimately you can’t really g’wrong wi Yorkshire.