We were all hoping for snow and packed all our snow gear and equipment however the weather didn’t cooperate and it had mostly thawed at the lower elevations by the time we arrived.  However, we all had a great weekend anyway.

Peter and Kathy drove up on Thursday and then on Friday morning headed up to the gullies under Bristly Ridge, going all the way up the snow slopes to the Glyder Fach plateau.  They found a lot of wet melting snow and clag.

Dan and Andy arrived in the morning and walked east of the Carneddu and around Llyn Cowlyn before descending back to the hut.

Friday night, while some chose to stay warm and dry, drinking a birthday toast to the great man, Robert Burns, Shane felt it necessary to go for a late night trail run.  Given the weather we were relieved to see him return.

The weather was forecast to be awful, high winds and rain most of the day.  Dan, Andy, and both Alans went to Anglesey in search of drier weather and went up Holyhead Mountain.

Peter and Kathy found some lovely weather around Conwy Mountain.  Apparently they could clearly see the socked in conditions back where the rest of us were.

Louie and Adam H scrambled up the eastern buttress and summited Tryfan despite the gusty wind, wind-chill and horizontal rain and sleet.  Hats off to you guys! 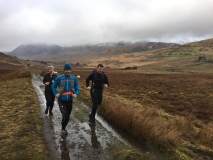 Stuart, Jason, Shane and Lexie all went for a run from the hut down the drover’s path and via PYB up to Moel Siabod.  It was very windy and only Stuart and Jason reached the top.  Shane and Lexie sensibly got as far as the wind allowed and stopped for refreshments at Plas Y Brenin.

Gill, Adam F, Ivona, Malcolm and Graham all walked around Llyn Ogwen, enjoying a hot chocolate and sausage roll at the Ogwen kiosk at the top end of the lake, Malcolm continued up and around Llyn Idwal.

We had a lovely evening enjoying our traditional

Burns Night haggis supper, with the Ode to a Haggis read and acted beautifully by Alan W.  We had a few issues with the fire alarm… little did we know…

Saturday night and into the early hours of Sunday we were woken up repeatedly by the fire alarm.  You’ll be glad to hear that Alan W and Adam H supported by Ivona and Peter all checked the hut each time to make sure there wasn’t an actual fire, before they were finally able to disarm it so that we could sleep in peace – well the peace of sleeping up inside the roof with the wind blasting the hut and shaking all the tiles.  Sunday morning we all slept a bit late 😉  Our thanks to heroes Alan W, Adam H, Peter and Ivona for running downstairs to sort it out while the rest of us rolled over and tried to sleep. 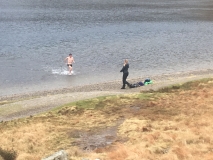 Dan, Andy and Louie headed home early.  Malcolm, Shane, Lexie, Jason, Adam H, Stuart and the two Alans all did the Llyn Ogwen and Llyn Idwal walk.  Shane decided it was great weather for a swim!  Peter and Kathy hiked from Capel Curig onto Crimpiau, Craig Wren and Creigiau Gleison.  Gill, Adam F, Graham and Ivona stayed in the warm and cleaned the hut beautifully.

It was an awesome weekend despite the weather and everyone enjoyed themselves.