11 of us went on this trip. Alan M and Graham arrived 1130hrs, after an effortless journey. We had been warned before hand, that some building work was still ongoing as it had been delayed because of bad weather, and we were greeted by the builders’ backside who was on his knees facing away from us while tiling the floor in one of the toilet cubicles.  After some discussion, it was apparent that there weren’t any doors on the toilet cubicles and the builder asked if we wanted some curtains hung where the doors should have been, which we readily accepted as we couldn’t imagine anyone wanting to sit on the loo in full view of anyone passing !!

After a cup of tea and toasted hot cross bun kindly provided by the hut warden (who was supervising the builder), Alan and Graham took stock of anything we were short of (coal, scourers, washing up liquid, bin bags) and they purchased them from the garage in Hathersage.  It would have been rude not to visit the Outside shop, while we were parked next to it, besides the weather wasn’t very appealing.  They resisted making any purchases though!

Back at the hut, the warden and builder had left, so we cleaned the kitchen and washing up area (it needed it), and as the weather was still unpleasant, and neither of us had an appetite to be out in it, we decided to get the fire going to warm the hut for when others arrived as it was really cold.  The file took a while to get going, but was really hot by the time that Gill arrived, followed by Peter and Kathy, and Adam and Malcolm.

Peter and Kathy started a periodic table jigsaw puzzle, and most people helped.  Is this a new club tradition?  Out with table traversing, in with jigsaws?

A fairly relaxed start to the day.

Dave C arrived in time to join the car share down to the start of the day’s linear walk that Kathy proposed and led. 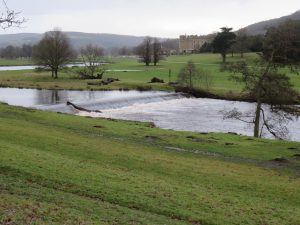 We started at Calton Lees car park in Chatsworth Park, south of Chatsworth House, where Kathy had arranged to meet her friend, walking back to the hut via Baslow village, where the weather deteriorated rapidly, and we all rushed to don waterproof jackets and trousers when it started sleeting heavily.  Up to Baslow Edge, onward to Curbar Edge, Froggatt Edge, then down into Grindleford, and instead of walking up the road to the hut, we chose to stay east of the River Derwent, and only crossed to the hut side (west) of the river, when we were north of the hut, and slightly south of the Cutlery museum, with the idea being there was less distance to walk down the road to the hut, than there was walking up to it.  It increased the route distance slightly by 1.5 miles, but the upside was, that now we were back on the B6001 on the west side of the river, it took us right past the Plough Inn, and Peter suggested we go in for refreshment.  We all went in, and enjoyed mulled wine, beer, tea and coffee.  Setting off in time to walk down the road while it was still light, we walked the 0.8 miles back to the hut, and were greeted by Shane, Sonia and Max, and a roaring fire (thanks Shane), who claimed he lit it just by staring at it !

We arrived back at the hut dry, which always helps.

Shane, Sonia and Max had arrived Saturday lunchtime, and spent the afternoon in Hathersage before settling in the hut.

Everyone joined in prepping and cooking the vegetables for our Christmas dinner, and Peter did a great job being in charge of juggling the limited oven space in the oven, and achieved excellent roast potatoes.  We need to book Peter for the next Christmas meet.

There was a concerted, and successful, effort to finish the puzzle before dinner was ready, so the table could be used without risk of losing any pieces.

We all enjoyed a delicious traditional Christmas dinner, followed by Christmas pudding and Brandy cream, and mince pies heated on the wood burner.

Alan treated us with his accordion and singing carols, which we enjoyed and appreciated.

After we cleaned the hut, Shane, Sonia and Max went to Edale, ascending Grindsbrook Clough to the Kinder Plateau, returning to Edale for a pub lunch before heading home.

Adam ascended Kinder Scout, across the rather snowy plateau to Kinder Downfall and Kinder Low.

Peter and Cathy hiked Stannage Edge and Bamford Edge, with lovely views of Ladybower reservoir, with an unplanned excursion off piste. 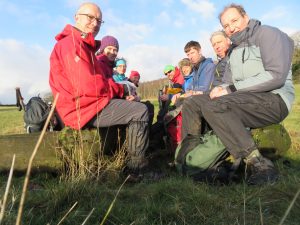 The rest of us walked a circular route proposed and led by Gill, starting at Surprise View car park (I don’t know about a surprise view, but we were certainly surprised how cold it was), then a figure of eight on Hathersage Moor, walking under Burbage South, then Burbage North before circling back to Higger Tor.  We improvised a little with the route, and had a great day.  There was a 3 hour (max) orienteering event on the moor, so there were lots of people running and looking at maps. 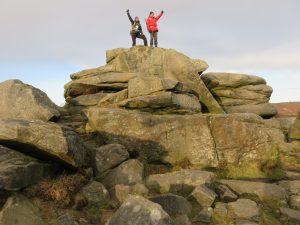 We were surprised by the large number of people that were climbing or bouldering, while we were heavily dressed with hats and gloves.  They must have been cold. We all thought ‘rather them than us’.  On the way back, some of us scrambled up the various rock piles for photo opportunities.

As we headed down the slope near the car park, we had to stand to one side to allow a mixture of 5 off road trucks and cars, who were slowly making their way up the hill over the boulders, in low gear.  We watched them for a while, fascinated by their skill and manoeuvrability as they overcame the obstacles.  We chatted to one of the drivers, who explained they are part of an off-road ‘rock crawlers’ club, and go out for 1 hour, then turn round and come back.

Then we made our way to our respective homes.

I forgot to mention that the ‘rock crawlers’ were 1:10 scale radio controlled electric vehicles, and the ‘drivers’ were walking while operating their transmitters.  I am tempted to buy one, as they looked great fun, although I already have enough hobbies, and do not have easy access to the rocky terrain. RCGeeks offer a great range if you want to take a peep https://www.rcgeeks.co.uk/electric-cars/off-road/electric-rc-rock-crawlers