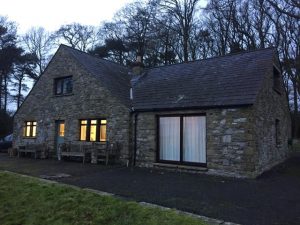 Milton Keynes Mountaineering Club are a hardy bunch!  With Storm Dennis threatening to bring chaos to the country our hardy members ventured to North Yorkshire for the weekend.

Dan and Tom arrived early and climbed Pen-Y-Ghent via a Pennine Journey, found lots of snow at the top! There was of course a pub stop on their way back to the hut. The rest of us arrived later during the evening, thankfully to a nice warm fire (thank you Dan) because the heating in the hut wasn’t working! 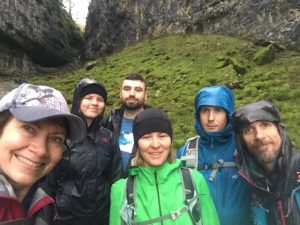 Dan, Tom, Gill, Lexie, Shane, Sonia and Max all climbed Ingleborough from Clapham Village via the caves. It was a lovely walk but Storm Dennis caught us up when we were at the first summit, Little Ingleborough. Hardy Shane ran across to the main summit and back but the rest of us were happy to summit something if not the actual summit and then we battled our way down against the now strong wind, rain and hail. Once we were down of course we had to visit the local pub and give them some business. We returned to the hut and the storm really got going. 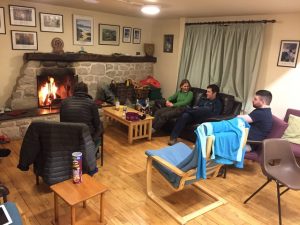 We had a lovely evening all sitting round the roaring fire playing bananagrams, various different versions including a Star Wars one, while the wind howled outside.

Dan and Tom went for a walk around Malham Cove and Gordale Scar. There was lots of water at the Gordale Scar waterfall courtesy of Storm Dennis. 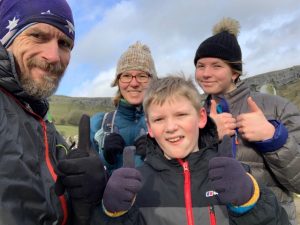 Shane & family also went to Malham Cove for a bracing walk and the obligatory visit to a local coffee shop. Gill & Adam went to Manchester Climbing Centre for one last climbing session for Adam’s DofE. 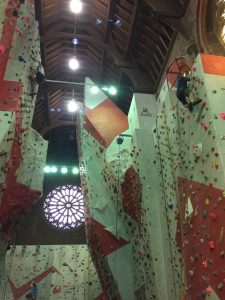 What an amazing place, built inside an old church. We were told the highest wall is 20m, almost twice that of Kingston’s 11m! With Storm Dennis predicted it would have been very easy to have cancelled the trip but we all had a brilliant weekend and avoided most of the weather.