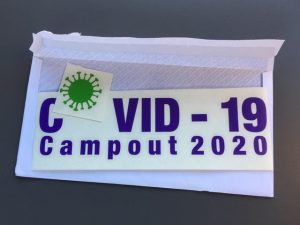 How can you camp during the COVID-19 outbreak without braking the government guidelines? Well two members show us how to do it, at opposite ends of the camping spectrum . . . .

Ian Alcorn had the initial idea and promoted it on Social Media, Gill takes up the story. “Well how could I refuse! I’ve been missing my camper van and felt rather trapped so I decided to camp on my driveway along with 26,000+ other group members! I donated my £2 and ordered my sticker.

It felt so good preparing and packing for my trip. First I had to wash the van, I couldn’t sleep in such a dirty vehicle! Once it was clean and shiny again I emptied and refilled the water tank, put some drinks in the fridge, snacks in the cupboard and packed my pillow and sleeping bag ready to go. I then moved the van out of the garage onto the drive, a much easier journey than a normal weekend away, traffic was very light and I arrived early. I had to put the front wheels on chocks because my drive is slightly off-level. Once situated it was time to set up camp. A van is easier than a tent but there are still things to do. I wound out my awning, took out my table and chairs, hung up my rainbow hot air balloon like I usually do at a festival. The neighbours were intrigued so I printed out the poster and put it in the window so they could see there was a reason for my madness, well, an excuse shall we say. I sat under my awning with my dogs and a drink and relaxed, feeling very happy. Adam decided to join in at that point but only if we ordered Dominos. That’s the first time I’ve ordered a takeaway to be delivered to my van! The delivery driver was struggling not to laugh as he gave us our first ever Dominos table service. We ate dinner and then Adam decided he was done and went back inside. 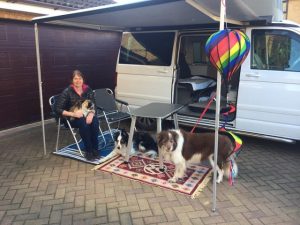 I stayed out and chatted (at a safe distance) to my neighbours as they went past on their walks. It was lovely to see a few people having stayed inside for almost two weeks except for the odd shopping trip and dog walk. Later there were FaceBook live quizzes, a virtual camp fire and live music streaming via the FB group so we all felt connected even though we weren’t on the same campsite.

Bed time came along and I let the dogs out in the back garden while I set up my bed. It was easier than usual because I wasn’t camped on wet grass. I settled down to sleep with both dogs and one of my cats. Soon afterwards another of my cats was meowing outside, he’d figured out where we were and wanted to join in. In he came but then he wanted out, so out he went, then came back in. He settled down for a while but then started exploring and somehow got trapped under the bed so I had to rescue him and this time kicked him out and put him back in the house. I slept well after that and so did the dogs and the cat that stayed.

In the morning I remembered what a great site this was and I went to use the facilities which were spotless, with loads of hot water in the showers. I had my free decaf coffee and relaxed, there was no rush to get off the site. Eventually I decided it was time to go home so I packed up and drove home, another very easy journey back into the garage.

This was a lot of fun and put a huge smile on my face even though my neighbours were convinced I’d gone over the edge without a parachute. And the money raised was way more than the initial £100 goal set by Ian Alcorn. Between us all we raised over £94,000!!!!

Everyone had a great time, so much so that they’ve decided to do it again this weekend! Join in :-D”

Awning?  Table?  Chairs?  Hot Air Balloon??  None of those are needed for a back garden bivvy just a tarp, sleeping bag, bivvy bag, sleeping mat.  Well just a sleeping bag to be completely honest, but the rest do make it much more comfortable, especially if it rains! Inspired by Gill, but a couple of weeks later I dug out an old Survival Aids tarp combining that with a new bivvy bag – hey presto a night out. 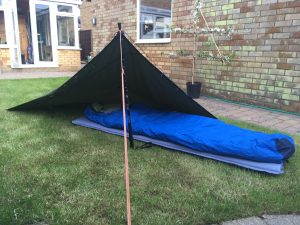 Late afternoon I pitched the tarp using a walking pole and rigged up the LED lights (makes sorting yourself out so much easier)! I also, put my sleeping bag into the bivvy bag, so much easier in the house.  After dinner and a film with the family in the house I ventured outside and climbed, no squirmed into my sleeping/bivvy bag.  It is very different seeing the sky while lying in a nice warm sleeping bag while gently drifting off.

Just before 7am gentle rain started to fall and that woke me up.  I dozed off again with the gentle pitter patter on the tarp.  Around 8:15 the noise of heavier rain woke me up again.  I was still warm and dry; I’d planned to brew a coffee while in my sleeping bag, but how heavy was the rain going to get?  I decided to retreat indoors for coffee in the conservatory.

Ian’s Great British camp out has now raised over £160,000, and is carrying on for the rest of May, especially the two Bank Holiday weekends.