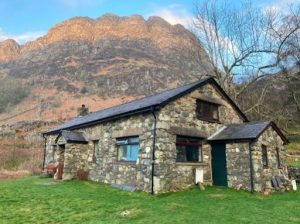 The club’s return to this part of Snowdonia seemed destined never to happen. Postponed twice due to COVID-19, The Mountain Club, Stafford were good enough to welcome us back in March, 2022. The wait was worth it!

Lee and Henry (guest) arrived Thursday evening as an advance party whose main purpose was to figure out all the electrics, heating and watery bits and pieces. 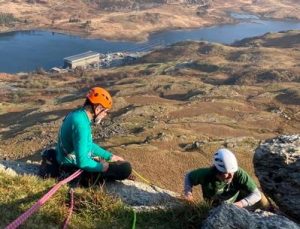 After a quiet and peaceful night, Lee and Henry bouldered at Carreg y Foel Gron on Friday AM & early afternoon, the hardest problem being “Llygaid yr Haul” at 5c. In the late afternoon, they wandered over to Craig Bodychain in Blaenau Ffestiniog for a spot of spot climbing, the highlight being a lovely juggy 5a called “Dip Your Toes”. After Alan W and Neal checked into the hut by way of claiming the best bunks, had a cup of tea, they opened door and walked directly onto the local “First Anniversary”, a 27m moderate, for Neal’s first outdoor climb.

Lee and Henry, along with Alan M and Jason went to Craig Y Clipiau, and did “Depression Direct” (HS) and “Africa Rib” (VD). Jason and Alan M get special credit, and possibly route naming rights for going off piste, discovering their own ‘exciting’ route not mentioned in the guidebooks. What will they call it? Alan W, Gill and Neal also headed to the Moelwyns and climbed “Slick” (VD), which was to be the first big multi-pitch climb for Gill and Neal. Alan W lead off up the first pitch to the massive ledge for that first belay, Gill followed re- clipping the gear to protect Neal’s climb. The second belay ledge was smaller and was shared with another team where their routes crossed. Neal really enjoyed the crack on 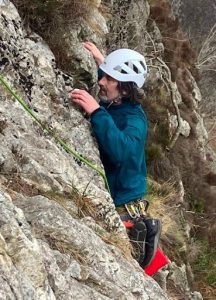 the right on pitch three. Slick is an excellent introduction to large multi-pitch routes as each of the spacious belays has an abseil anchor pre-rigged by Plys Y Brenin, who use this area on their courses.

David, Floyd, Alex and Shane opted to take a clockwise circular stroll around Cadair Idris followed by a sea-side stride to Barmouth, taking in coffee and tea at the least busiest cafe in town.

Lee and Henry did some more sport climbing at Trevor Quarry near Llangollen, with the climax being “Haven’t Got a Clue”, a tricky 6a+ slab. David, Alan M, Floyd and Alex went walkies up to Glasgwn, or at least that’s where they though they were based on Floyd’s new “pinch-to-zoom” method of OS paper map reading. Bob and Sophie went for their normal Sunday morning run from the hut, up to Aran Fawddwy (905m), and back to the hut via Drysgol. This was followed by a bit of afternoon climbing on “First Anniversary” (Mod) and “Twink” (HVD) at Edgar Felen Isaf.

Shane went for a similar run, but this also included an add-on to Glasgwn (779m). After such a fine day Saturday and a sunny Sunday morning, it was disappointing that the summit of Aran Fawddwy and the first 200m of descent was in clag, although by the time he returned to the hut, and valley had cleared, and he was able to sit, drink coffee, and watch those climbing on the crag outside … who were Alan W, Neal and Gill. They did “Will-o’-the-Wisp” 89m (HVD). The author will not elaborate any more on this point, apart from there was lots of coffee consumed. It was a fantastic, long awaited return to this part of Wales, and the Milton Keynes Mountaineering Club wishes to thank the The Mountain Club, Stafford for accommodating us for this meet.