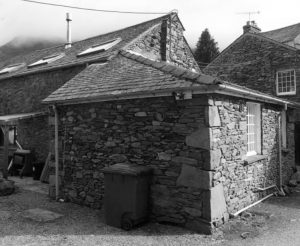 We were hoping for snow, with ice axes, crampons, helmets and warm gear all packed and ready. What we had was torrential rain, more torrential than I ever remember, and extremely high winds even at low elevation!

In the afternoon Dan, AlanW and Gill 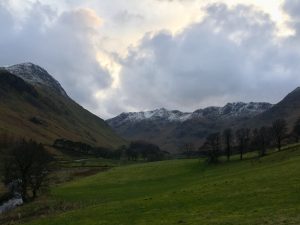 all arrived around 3pm and it wasn’t raining. We offloaded our luggage and went for a short hike up to Lanty’s Tarn and back to Glenridding where we had a quick drink in the pub. Tom and James also arrived early enough on Friday to do something and went for a hike up to Red Tarn. We decided to cook rather than eat out so that we were there when everyone else arrived Friday evening. The wood-burning stove in the middle of the lounge was superb and heated the whole place. 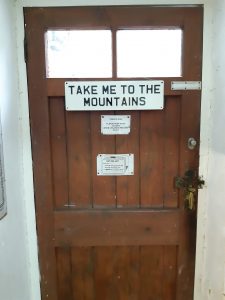 On Saturday the weather wasn’t cooperating at all. Sideways rain and very strong winds meant it really was an effort to go out! It didn’t seem to affect Rich, James and Victoria who went for a run while the rest of us had breakfast. Having checked the forecast a few times the whole group then went for a low level hike up the valley to Grisedale Tarn. A few of us turned back and made a shorter circular because conditions were difficult, we were cold and wet, no waterproofs would withstand rain like that. The rest of us almost made it to the tarn but found they were being literally blown off their feet, so they followed suit 30 minutes later. 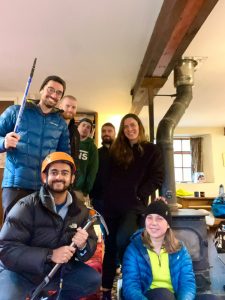 The hut’s new drying cupboard was really put to the test once we had all returned, but eventually everything dried and a few went to the pub to watch the rugby. Most of us cooked dinner at the hut on Saturday evening and then played a form of dominos. I don’t remember how the conversation went but later on Amaad decided to fry an egg in a pan on the wood-burning stove. It worked 😉 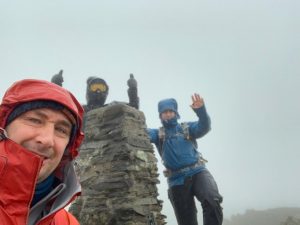 After the super keen runners came back, Tom decided to have a nice stroll around Glenridding; Amaad, Michelle and Alex hiked up to Silver Crag and then went home; and the rest of us all did Great Mountain Days hike No 46, Place Fell. Again it was extremely windy and Gill & AlanW decided to hike around rather than summit. Stacey, Meredith, and Dan went up and over. Rich, James and Victoria went up and back. There was water everywhere, flooding even. Gill & Alan’s route took them down what seemed to be a waterfall in full spate but it really was the trail! Then we waded through an ankle deep flood on the road. Lunch was quickly scoffed standing in the shelter of a farmer’s wall in the pouring rain, trying to stay out of the cold wind. We all met up shortly after Lowther Barn Tea Shop, which was closed, and continued along the lakeside. It felt like a long hike from there back to the hut. Later those of us who were left went for a pizza and beer 🙂

Five of us stayed until Monday, but one was tired (Gill). So Dan and AlanW hiked up Glenridding Valley via Lanty’s Tarn, crossed the beck and came back via Glenridding. Gill stayed behind and cleaned and chilled as she was doing the driving. Tom and James helped with the cleaning and then left. We noticed that the snow we had hoped for arrived during Sunday night, sadly not really in time to do any mountaineering  🙁

It was a great weekend!