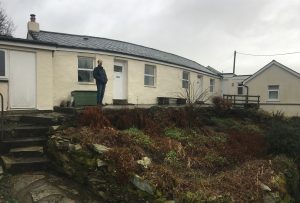 Gloucester Mountaineering Club had allowed us to push back our Annual Burns booking from 2021 to this year due to the COVID pandemic.  After the 2020 virtual Burns weekend, we were determined to enjoy a MKMC traditional Burns weekend as possible, following the Welsh Government’s COVID guidelines.  Numerous members had been upgrading their kit ready for some proper snowy conditions; we’d got four pairs of new B2 winter boots, each with it’s own set of new crampons, plus Alan W had replaced his 42 year old Selewa crampons.  There were a couple of new ice axes and some micro-spikes, not forgetting new clothing.  MKMC was attempting to single-handily save the UK Outdoor gear industry!

Alan W had been building anticipation with snow forecasts and views from the Ogwen Valley mountain rescue webcam.  Six intrepid Milton Keynes mountaineers headed up on Thursday evening to make a longer weekend of it.

In a quest for snow Alan M, Alan W, Dave, Jason, Tom and Victoria all headed for Ogwen, hoping to find it up on Y Garn or along the ridges to Elidir Fawr and Carnedd Y Filiest.  Leaving Llyn Idwal the team soon walked into the mist that was to feature for the remainder of the day. 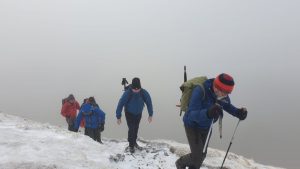 It was rather windy on top of Y Garn so we all huddled down in the summit shelter for a quick lunch.  Then we dropped down and headed north along the ridge towards Foel-goch, dropping again, this time out of the mist we saw the Carneddau stretching out to the East.  Not for long as it didn’t take long to climb back into the mist.  Looking at the time & speed we were moving we took the collective decision to summit Mynydd Perfedd and then turn around.  The planned ‘off-piste’ descent was also passed up in favour of sticking to paths in the mist.  We even re-planned the re-planned descent by countouring around Foel-goch, to save time.  It worked, we were all down on the path from Llyn Idwal to Ogwen Cottage in the light, as dusk settled in.

There was snow up high, but patchy, not too icy and not too deep.  All, well almost, all the new winter gear stayed in rucksacks.  Tom did use his micro-spikes and ice axe, as a walking stick, for the descent from Y Garn.

Back at the hut, we brewed up, cooked, ate, chatted and waited for those who had commitments on Friday to arrive.  As people arrived, slowly a grand plan was hatched.  We were all up for a big day out – The Nantille Ridge. 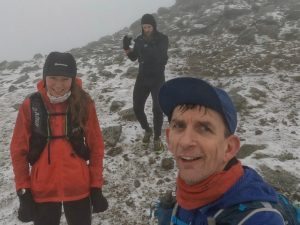 Bob, Shane and Sophie went off one of the normal ‘gentle little runs’ just 38km with 2,800m of ascent! Knocking off some of Snowdonia’s greats: Carnedd y Filiast – Mynydd Perfedd – Elidir Fawr – Y Garn – Glyder Fawr – Flyder Fach – Pen-y-Gwryd Hotel – Crib Goch- Garnedd Ugain – Llanberis – Dinorwig. Being a January Burns weekend our intrepid runners had low visibility and wintry conditions to deal with, made moving safely their top priority but they still moved quickly.   There was a strange encounter with what appeared to be a man with bagpipes in the mist on Elidir Fawr! A little later on the approach to Crib Goch Shane suffered a really bad ‘bonk’; not the ideal place to hit the wall, but it’s amazing what peanut butter and jelly can fix!

The rest of us: Alan M, Alan W, Alex, Dave, Floyd, Gill, Jason, Juan, Stacey, Tom and Victoria loaded up and headed off to Rhys-Ddu.  It was Ok for Alan W, Juan & Stacy as they did the car drop at the finish, but the rest of us had to wait outside in the cold for ages.  They were soon (according to them NOT us) back, booted up and we were off.  On the climb up to Y Garn we entered the mist.  Some of us weren’t moving fast enough to complete the ridge in daylight and after a brief team discussion Alan W, Tom & Victoria headed back to the cars at the start after a quick lunch in the summit shelter out of the wind.  (Two Y Garns both in mist with summit shelters on two separate days!)  Their plan was to head back to the hut to get the fire on than Alan W to meet the ridge team at Nebo.

Meanwhile, back on the ridge they continued along the ridge, bobbing along in the bottom of the cloud layer, hoping the cloud would raise enough for us to get the views. Collective navigation using bearings and timing took us safely along the ridge.

Just before the lunch stop a few familiar faces emerged from the ‘fog’. Peter and Kathy who had left their car before us, and started to progress along the ridge ahead of us, before deciding to make the route circular.  Having reached Mynydd Tab-y-mignedd they backtracked and met the larger party on route to the obelisk. The Obelisk was the obvious place for lunch, before the route continued in the clouds, before emerging on the final leg at Carnedd-goch. The wild decent to Nebo, provided an appreciation of the unspoilt wilderness of this area of Snowdonia. During the descent to the dusk arrived; it was dark by the time the ridge team arrived on the outskirts of Nebo.

Alan W was just about to make the left turn before the pick up point when he spotted a line of walkers also heading there.  Excellent timing!  Alan W loaded up and headed back to start cooking the Burns dinner, Gill and Juan juggled lifts and cars to get everyone else back to the hut.

As is normal for our Burn’s dinner the kitchen was filled with people pealing, slicing, chopping, dicing, toasting, frying, mixing, stirring, watching, tasting, crushing, blending then serving.  At least this year Alan W had remembered his hand mixer so poor Shane didn’t have to whip the cream for the Cranachan by hand!  The Haggis was piped in, of course, before Alan W read the full Address to the Haggis, giving it the ritual stab, at the appropriate line in the poem!  The second shift took over in the kitchen after dinner and scraped, washed, scrubbed, dried, stacked & hung everything back in its place.  Then it was over to chatting with friends, plotting and planning for tomorrow. 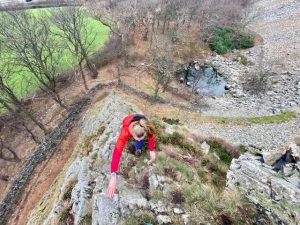 We split into three groups today Bob & Sophie, hoping to avoid the weather went north, to the coast, not for the beach but Penmaen-Bach Arête a grade 3 two star scramble that almost goes from the A55.  With only a short approach and no difficulty finding the obvious start, they were soon scrambling on good rock. It didn’t take them too long to get to the top for a quiet lunch with lovely views looking out over Conway Castle. An ideal short day on your way in or out of Snowdonia. 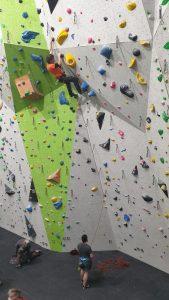 Alan M, Alex, Floyd, Tom and Victoria headed off to the Beacon, as they didn’t fancy another day in the mist.  Being warm, dry and pulling on plastic was the order of their day.  They higher walls of the Beacon allowed them to build their stamina for the upcoming summer rock season.  Whilst those high walls in the Beacon were tempting, the rest of us: Alan W, Dave, Gill, Jason, Juan, Shane & Stacey headed off to Ogwen planning on Glyder Fach and Glyder Fawr via Bristly Ridge and hoping for the cloud inversion that the weather forecasts were hinting at .

We started off and just above Llyn Bochlwyd bumped into our old friend – the mist!  It was good to get hands on rock as we slowly, securely and safely made our way up.  Reassuring and spotting each other where necessary.  Every now and again a slightly larger view ahead would appear as the mist blew by, raising our hopes which were quickly dashed as the mist closed in again.  Topping out from Bristly Ridge 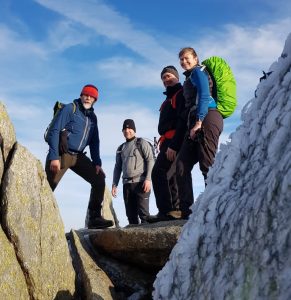 we gather for the misty group photo, or two.  Wait, what was that burning disc above us?  Sun?  What was that blue thing?  Sky?  YES the cloud inversion had started; we all moved towards the summit of Glyder Fach walking as quickly as the patch snow and ice would allow.  With each metre forward the cloud dropped a little more and peaks started to poke through the cloud.  We scrambled onto rocks to look at the ice formations formed by the wind.  Then a Brocken spectre appeared above Tryfan, there was a rush for everyone to get a photo in front of it.

Next stop, we’ll it had to be the Cantilever stone, most of us piled on, walking carefully because of the ice, for the obligatory photo.  One quick change over it was time for the remainder to get their Cantilever stone photo taken.  Then it was over to the high point of Glyder Fach so we could claim it.  From here we could see the big peaks of Snowdonia poking above the cloud: Snowdon, some of the Carneddau and our neighbour Tryfan.  It truly was a special summit experience with a cloud inversion and a Brocken Spectre.  We’d spent so much time admiring them that there was no time for our second summit of the day, Glyder Fawr!  We headed down to Bwlch Tryfan then onto Cwm Tryfan and down to the A5 where we’d left our cars.  We were racing dusk; just making it onto the old coaching track alongside the A5 very shortly after the sun had set.

All in all a great weekend.  So good to be celebrating Burn’s night together again.  We’ve booked Chester Mountaineering Club’s hut in Llanberis for 2023.  Coming?