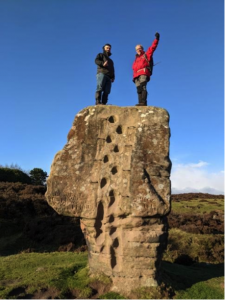 Our 2021 Christmas Meet was held over the weekend of 10th to 12th December. Somehow, 10 of us just about managed to squeeze into the main accommodation at Heathy Lea; Alan opted to “camp out” in the un-heated barn. We had been to the hut on previous occasions, even holding a Christmas meet there once, and we were warned (by our barn dweller) that cooking and eating together a Christmas dinner, as was the custom of MKMC’s Christmas meet, would be a challenge! In the end, however, we managed, after all, we’re all a close bunch of club members, who don’t mind each others close company!

Tom, Alan and Dave went for a wonder around the edges. Apparently it was too cold to climb, so only a spot of very easy ungraded bouldering was attempted.

By 10pm, all participants had arrived and the usual evening shenanigans kept some entertained until the early hours of Saturday, while the more sensible members bunked down, allowing their systems to rest before a big group walk, and even bigger group meal the following day.

All participant of the meet opted to spend the day together, which given the festive season, was a magical treat! I think it was Gillian who decided to lead the way with a nice hut to hut circular, taking in all the edges surrounding the hut, and crossing the Chatsworth Estate. While the route lacked in 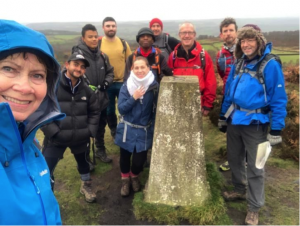 precarious plummets and other horrendous hazards,  it was a lovely 13 miles stroll through typical English Peak District stuff with great company.

Shane opted to run ahead with 6 miles to go so as he could get a 30 minute head-start with the cooking. Potatoes don’t peal themselves, and ovens don’t heat up unless turned on; although this said oven was so small, it didn’t take long for it to get to temperature! 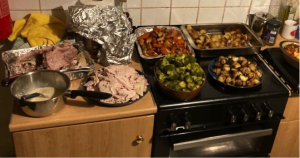 Luckily, Gillian had cooked the two birds on Friday before leaving, so all that needed cooking was the veg and pigs in blankets. “Easy”, they said! 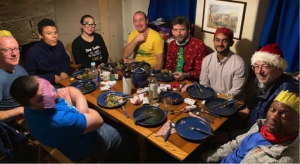 All participants pitched in and somehow, after three hours in the Peak’s smallest kitchen, our meal was ready to be served on the smallest communal table in the world. 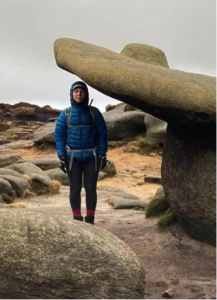 Victoria and Gillian went for a stroll, following in the dust of Shane and Amaad who opted to trail run on the Dale / Kinder Scout / Devil’s staircase circular. 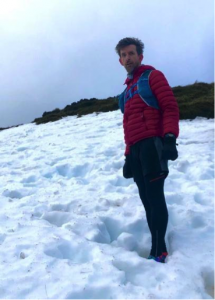 Dave, Alan and Tom went for a wonder up to Stanage Edge then along to Burbage. Stacey, Floyd and Alex had other pre-Christmas business to 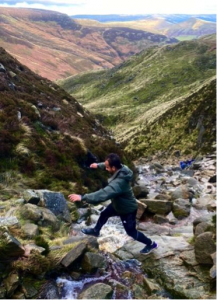 attend to, so made their way to their respective homes.