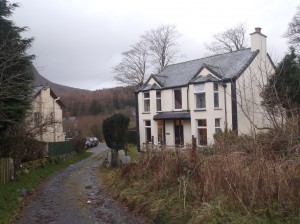 This years MKMC Christmas meet was at Tan Yr Wyddfa the mountaineering hut of the Oread Mountaineering Club in Snowdonia and is at Rhyd Ddu.

Friday – Alan, Stuart and David set off early(ish) for N.Wales having the obligatory stop off at Kent’s Cafe near Shrewsbury. Alan and Stuart climbed Lockwood’s Chimney at Clogwyn y Bustach  – “fairly unique in that most of the climb takes place inside the cliff”. David went for the scenic option – a walk around Llyn Gwynant. 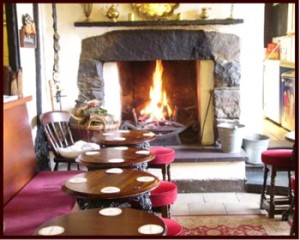 Jay, Andy & Dan arrived at hut, had lunch and went for a local walk followed by a couple of pints to check out the venue for Xmas meal of The Cwellyn Arms.

Saturday– With the weather forecast looking quite bad for later in the afternoon Alan, Andy, Gareth, David, Jay & Dan got up early and headed towards the Nantle Ridge at first light. In high winds they battle their way along the ridge passing over the peaks of Y Garn, Mynydd Drws y Coed, Trum y Ddysgl, Mynydd Tal y Mignedd  until they reached Bwich dros- bern where the wind greatly increased, so they dropped down into Cwn Pennant to get out of the wind and then headed back via the Barracks, Craig Cwm Trwsgl and the Beddgelert forest. 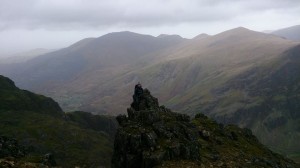 Ian, Gavin and Anna went around to Llanberis Pass and walked up into Cwm Glas and then scrambled up Clogwyn y Person Arete but due to high winds were unable to return via the ridge of Crib Goch , so return to their car after dropping back into Cwm Glas.

Saturday night everyone headed down for drinks, food and fun at The Cwellyn Arms in Rhydd Ddu – all kindly arranged by Emma C. 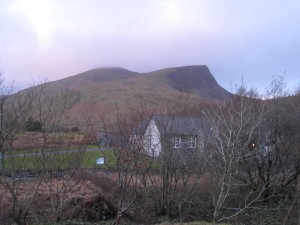 Sunday – After tidying up the hut everyone set of in different directions to look for things to do including Karen, Alan, David, Stuart, Jason, Steve and Peter going for a circular walk, starting at the National Trust car park at Nantmor. This 6 mile walk around Beddgelert had it all – part gorge walk, part upland boggy moorland and glimpses of Wales’ mining heritage. They got back to the cars in the early afternoon, and in pouring rain they headed home. While Ian, Gavin and Anna went off to do Snakes and Ladders in the rain.

A selection of photos from the weekend have been added to the Galley Section.