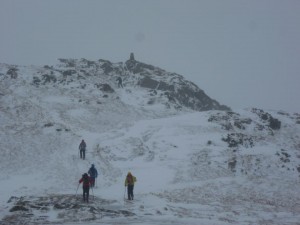 Overall it’s been a very good year for MKMC with club membership has increased by twenty since the last AGM, another record year with membership now exceeding 70. Club activity has been high with a large number of members attending official and unofficial weekend meets and day trips across venues in the UK and abroad. There has been a lot more website updates and facebook traffic from the committee to help get information out to the club, but more input from members is always welcome. So it’s worth looking at the website again & the picture galley to remember what a good year it has been.

December 2012 – The Christmas Meet – Oread Mountaineering Hut, Heathy Lea, an old saw mill on the Chatsworth estate near Baslow in the Peak District, was the club’s destination for the weekend, and it turned out to be very popular with club members with some members sleeping in the attached barn, Kent once again stepped up to cook a feast for sixteen hungry people. 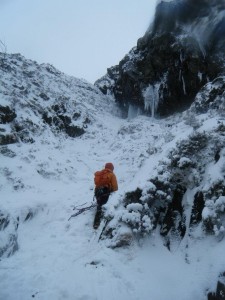 January 2013 – Burns Celebration weekend – The meeting at the end of January is when MKMC traditionally celebrate Robby Burns birthday. And so it was that fourteen members filled the little Welsh miner’s cottage in Bethesda belonging to the Wellingborough Mountaineering Club. Snakes and ladders route through the disused slate quarries and as usual Alan serving haggis neaps and tatties and the traditional poetry reading with an old member flying in from Germany to attend. 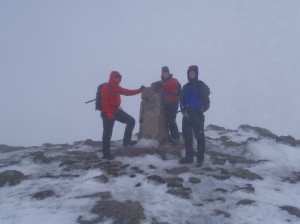 February 2013 – The club meeting for February was in the Chester Mountaineering Hut on the tourist path up Snowdon about 300m above Llanberis. Fourteen members attended the weekend and headed off into the North Wales hills walking up various peaks including Moel Cynghorion & the rest of the Moel Eilio range, Snowdon & Crib y Ddysgl via the Rhu Path and the South ridge plus Snowdon via the North Ridge & Crib Goch. Some even managed to do some rock climbing in the Llanberis Pass – Flying Buttress and a route up the East face of Tryfan. 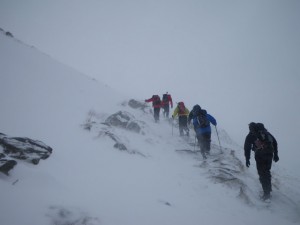 March 2013 – The club meeting for March was at the George Starkey Hut in Patterdale, near Ullswater in the Lake District. Snow storms and high winds made the drive to the hut impossible for some, but still attracted 10 hardened members. They battled deep snow, gale force winds and freezing temperatures all weekend but still managed to bag Place Fell, St Sunday Crag and Angletarn Pikes. Thanks to all that attended and despite the Arctic Conditions made it a good meet.

April 2013 – The Club’s destination for the April meet was the R. O. Downes Memorial Hut, nestling at the foot of Froggatt Edge. Seven MKMC members attended the trip. The first group to arrive on Friday morning headed up to Froggatt Edge, but it was damp, with snow drifts resting against the base of some of the climbs.  A few easy routes were climbed before heading back to the hut. Saturday promised warm and calm weather, and everyone set off for Rivelin Edge where a number of classic climbs were completed. On Sunday, some of the party went to Horseshoe Quarry while others decided to give Froggatt another try. The wind was incredibly strong on the edge – the Horseshoe Quarry team made the best choice! 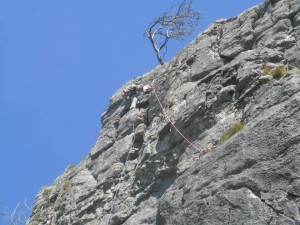 May 2013 – For some indoor camping at Kirkby Malham, just a stone’s throw away from Malham. A weekend that will be difficult to beat when it comes to drama and excitement, A Saturday afternoon hunt for a cream tea, members got to witness Steve McClure redpoint a 9a+ at Malham Cove. Sunday, and eveyone had a great days climbing at Rylstone with Stuart doing his first ever lead.  Finally, on the last day, a group of MKMC members went to Rocky Valley, Ilkley. Ian started the 3* route “Flake Climb” but got stuck by a boulder falling and trapping his arm. Mountain rescue, the police, the fire service, Yorkshire Air Ambulance and even the BBC came along to the rescue with Alan stepping in to play doctor.

June 2013 – The club’s camping trip in June was to The Sea Barn near Portland. Member spent the weekend walking along cliff top paths or climbing up the cliffs instead.

Also in June six members of the club arranged a trip to warmer lands  – Arco in Italy just North of Lake Garda for a week’s sport climbing. Staying at the camp site called the ‘Camping Zoo’ in two mobile homes with a covered patio area. MKMC were in Arco to climb, so once ensconced in our mobile homes we headed to various venues to climb including the crags at Massi Di Prabi, Parete Zebrata, San Paolo, Muro dell’Asino, Massone, Val Lomasone, Preore (the crag with the wooden sculptures), a 40km drive from Arco and at Noriglio 10 km to the East plus some via ferrata at Riva del Garda. There was a bit of sight-seeing, notably Arco castle, with some fantastic views over the town and Lake Garda. Ian’s accident from 3 weeks earlier didn’t slow him down one bit.

July 2013 – In July the clubs camping trip was to Beeches Farm Campsite in the Wye Valley with climbing at Shorn Cliff, Wintour’s Leap and Ban-y-Gor and walks around the valley including Devil’s Pulpit. Additionally club members went paddling in canoes and kayaks on the River Wye. 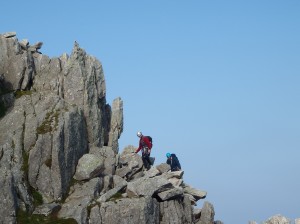 August 2013 – The clubs Summer get together was in early August with approx. 30 people attending the event at the Galleon in Wolverton. There was a raffle with lots of prizes and a quiz (which Rachel won). There was a great atmosphere, and near closing time a number of members headed off to CMK to party the night away. A good time was had by all.

Additionally in August, the monthly meet was a camping trip to Capel Curig, North Wales – A bank holiday weekend in Wales, and for once the weather decided to be kind. For the second time this year Ian’s trip didn’t go smoothly. Upon retiring to their tents on Friday Mac and Ian found them to be empty – they had been burgled. Also, for the third time this year, Emma’s car had a hand to play in proceedings.  Weekend activities included climbing at Tremadog, East face of Tryfan and Little Tryfan (which offered some the opportunity to practice placing gear and belaying). Despite mixed fortunes the weekend was a great success.

September 2013 – Eight MKMC members attended the meet in the Peak District at Hope Valley.  The weather forecast was looking dire for the club camping trip, and at the last minute the Don Whillans Memorial hut at The Roaches became available, and Ant (trip organiser) booked it. Friday – early arrivals had a play on The Roaches lower tier before rain stopped play. Saturday – a cold start, but the weather warmed up and we got a number of quality routes done. Sunday – In a howling gale some of the group went for a walk to Luds Church – an impressive piece of natural architecture. 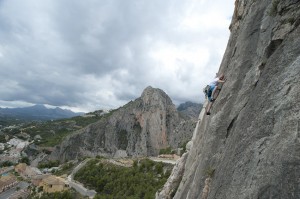 October 2013 – The clubs October meet in Capel Curig based in Gwydyr Mountaineering Clubs Hut. Tan-y-Garth Cottage is situated in woodland at the base of Moel Siabod – the area is very scenic and peaceful but convenient for local amenities including a Pub nearby and local stores in the centre of Capel Curig and in Betws y Coed, only a short drive away. Seven members, and Freddie the dog, attended the meet walking and climbing in the Owgen Valley including at Milestone Buttress.

Several MKMC club members also headed off to Costa Blanca for a spot of climbing.  The group stayed in a villa in Calp and climbed on several crags in the area including Sierra de Toix, alimestone crag with sharp and positive holds plus glorious views of the Penon, Echo Valley – Paret de la Bassa, Sella – probably the most popular area in the Costa Blanca, and with the polish to prove it!, Guadalest and a quiet ‘little’ crag at L’Ocaive, situated to the North of Calp. From a distance the crag looked rather vegetated, but weaving between the greenery were some lovely routes; clean and positive. Higher up the crag were some more testing lines, so there was something to keep everyone happy. The group also walked the Bernia Ridge. Climbing in Spain at this time of year is definitely preferable to climbing in the UK! 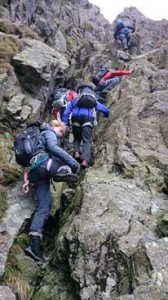 November 2013 – The clubs November meet was in Coppermines Valley based in Yorkshire Mountaineering Clubs Hut at the back of the town of Coniston. The meet was attended by eighteen members of the club who over the weekend climbed, scrambled and walked across the fells around the YMC hut and in the nearby valley of Langdale.

The Annual General Meeting 2013 was held at Big Rock climbing centre in Milton Keynes with 25 members attending and voting on a number issues including MKMC charities and the clubs Loan Equipment plus appointing the new committee. 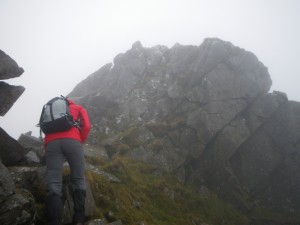 December 2013 – A Xmas get together was held in Milton Keynes centre in early December with about twenty members joining in the evening’s fun.

This year’s Christmas meet was at Tan Yr Wyddfa the mountaineering hut of the Oread Mountaineering Club in Snowdonia and is at Rhyd Ddu. The twenty one members of the club that attended the meet had to battle high winds and periods of torrential rain but various members still managed to do Lockwood’s Chimney at Clogwyn y Bustach, a walk around Llyn Gwynant, the Nantle Ridge passing over the peaks of Y Garn, Mynydd Drws y Coed, Trum y Ddysgl, Mynydd Tal y Mignedd, a scramble up Clogwyn y Person Arete in Llanberis Pass, walks around Beddgelert valley and climbing in the slate quarries above Llanberis. Saturday night everyone headed down for drinks, food and fun at The Cwellyn Arms in Rhydd Ddu.

Forthcoming events for 2014/2015 – The committee has already been busy arranging club meets for 2014/15. For Winter Meets we have a visit to the Lake District at the Fylde MC – Stair Hut for the Burns night fare – haggis, tatties and neeps and meets at Caseg Fraith, Owgen in Snowdonia plus at Malham in the Yorkshire Dales. Spring and Summer are the seasons of camping trips with plans to visit Cornwall, Wasdale in the Lake District, Wye Valley, Peak District, Lundy and Swanage. In October the club is planning to have a foreign meet in Spain. Then it’s a return to Mountaineering Huts in North Wales, Lakes District plus holding the 2015 Burns Meet in Scotland.