November 2019 meet in the Lake District

Our November trip was arranged to coincide with the Kendal Mountain Film Festival.  We’d arranged to use the Robertson Lamb Hut, owned by The Wayfarer’s Club, located in the Langdale Valley.

We managed to arrange for a few of us to go up a day early, so Kent, Ange, Simon and Alex arrived on Thursday to make a longer weekend.  This isn’t always possible but is nice when it can be arranged.

AlanW and Stuart went up early, checked into the hut then went for a hike up Jack’s Rake, meeting Ang, Kent and AndyR at Stickle Tarn on the way. 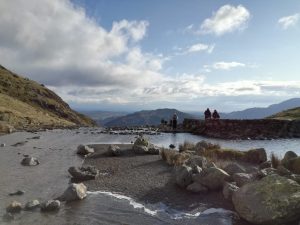 On the way down they bumped into Michelle and Dan and all went to the pub.  Ange, Kent and Andy hiked up the New Dungeon Ghyll pub and on to Stickle Tarn and back.  Dan and Michelle hiked up to Stickle Tarn, then up Pavey Arc, Harrison Stickle and back down to the pub.  The rest of us all arrived later on during the evening.  There was cake, Gill was celebrating her 21st birthday and brought a home-made red velvet cake and a less popular chocolate cake from Asda – both were demolished during the weekend.

I was impressed to see members cooking sausages, pancakes and even full English breakfasts before they went out. 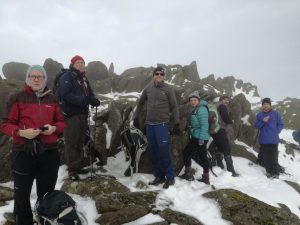 Stuart and Jason had an adventurous day, they hiked up the Pike O’ Blisco, Crinkle Crag, Bow Fell, Esk Pike and the Pike of Stickle.  Dan, Ange, Kent, Michelle, AndyH, AndyR, Dave, Josh and Alex all did an equally adventurous day, hiking up the Rossett Gill path to Ore Gap, then Bow Fell, Crinkle Crag, Pike O’ Blisco, and back to the hut.  AndyH ran back to catch his ride to the Kendal Mountain Festival with Gill and Adam.  Gill and Adam hiked up to Stickle Tarn, had lunch by the tarn under Jack’s Rake enjoying watching the scramblers going up, then hiked back down to the hut and went off to the Kendal Mountain Festival to see some films. 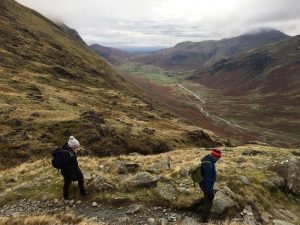 AlanW, Nick and Zoe did Walk 3 in Gill’s Great Mountain Days book, Loft Crag and Pike O’ Stickle and along to the end of the valley from New Dungeon Ghyll.  Simon had a lie in and then did Stickle Tarn and Harrison Stickle.  Nick and Zoe followed Adam, Gill & AndyH over to Kendal to see some great mountain films and enjoy the festival atmosphere.

In the evening by the time everyone got back to the hut we all sat around the fire, chatted and enjoyed a few drinks together before eventually retiring. 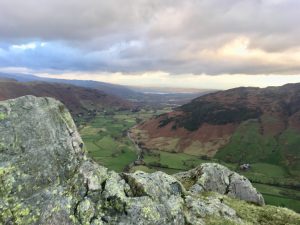 The weather went downhill and after all jointly helping to clean the hut, some headed home.  Gill, Adam and AndyH went back into Kendal for some more mountain festival films.  AlanW went back to Kendal later on and commented on what a great atmosphere it was in the festival’s base camp. Stuart, Dave, Jason, Nick and Zoe all went up Jack’s Rake.

All in all a brilliant weekend in a seriously lovely hut owned by the Wayfarer’s Club.  It was an interesting layout, with three separate bunkbed dorms, male, female and mixed.  It was nice for the ladies to have their own space and facilities in a brand new annex.  The men’s dorm and facilities were above the living room and I loved the old curved stone staircase to get up there and the high ceilings and bunks upstairs.  There was plenty of parking too.  Definitely a place to go back to in my opinion.