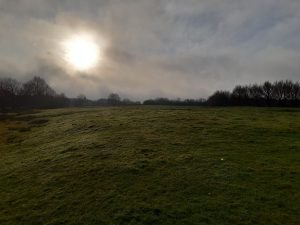 January sees the year start with the very popular Burn’s Meet, for winter fun and a traditional Burns dinner.  We are all fed up after almost a year without a big gathering so weren’t going to let a little global pandemic stop us from getting together for this weekend.  Alan W had planed: A, B & C all were hatched as the situation evolved.  Plan D was dodgy!  We ended up on Plan Z – Zoom.  Some of us gathered in pairs for exercise, distanced of course.  Gill set up a WhatsApp group so we could join in with the normal club banter in the build-up and over the weekend.

Gill and Alan W planned an ascent of the north face of Bow Brickill hill, 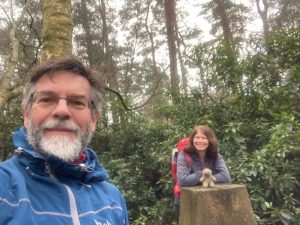 the high point of Milton Keynes.  Dan, Chrissy and Molly dropped off some essential liquid for later – all keeping their distance.  The summit team headed off over muddy, ney very muddy fields to Bow Brickhill before the climb and the summit Trig point hiding in the woods.  Then it was off through the woods before returning to Gill’s. Crossing the railway line the snow started, getting heavier all the time; time for a little snowflake catching on the tongue! 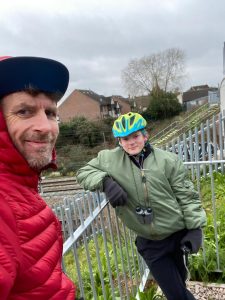 Shane and Max also hit the trails heading out on bikes to lovingly gaze into the distance at the Bedford Alps in the distance.  (Alps just over the border in Bedfordshire I’m going to have to check that out!).  Over in the south west of Milton Keynes Dave C was bravely battling over the rolling hills striding out to the summit of Furzton mountain.  It seamed like all the action was happing in the south of MK Dan, Chrissy and Molly successfully ventured up onto the Caldecote plateau.  After returning home Shane was side tracked with organising his gear but, being a keen outdoor athlete, he also ventured out for a run.

It wouldn’t be a Burn’s weekend without a communal dinner, naturally this year things 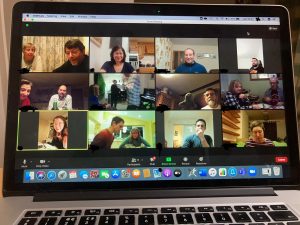 were very different!  19 of us gathered around our computer screens for a virtual dinner. There were various soups (leak & potato, Cullen Skink) the start of the show was of course Alan W reading the Address to the Haggis.  There were a selection of deserts cranachan, clootie puddings and Scottish cheddar with oatcakes. Rounding the evening off was a Scottish quiz.  Dan and Chrissy were the winners (winning the Tunnock wafers) and Gill picked up the wooden spoon (or Tunnock Tea Cake).  On reflection it was a little on the hard side so Alan W said he’ll do multiple choice for his next quiz). 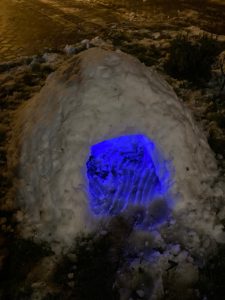 Sunday dawned snowy; we didn’t let that stop us we were out again.  Gill built a snow cave to practice her winter survival skills.  Shane wasn’t finished running, he went out for a ‘little’ 26km run.  Stuart and Alan W did a 26 mile bike ride, mainly on gravel, around Milton Keynes from Tongwell down to Bow Brickhill and up the hill before heading out in the woods to Cranfield. 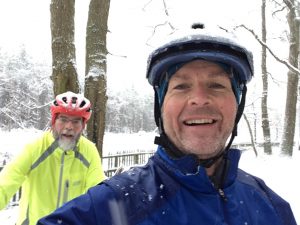 Including the first snow traverse of the new cycle path beside the A421.  Alan W had become a little too cocky on snow and found that in a battle with a snowy corner gravity will always win!  The worst section was the stretch on the roads back from Cranfield: Sleet + standing water + spray from cars + wind = cold wet cyclists! 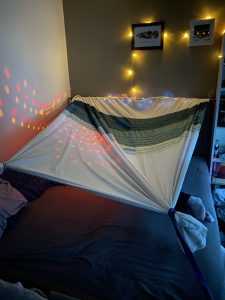 The most virtual of events on this virtual weekend was Zoë and Nick’s virtual bivvy.  Just starting on the most adventurous of journey known to humanity (parenthood) they are going to have plenty of adventures to come.

Thank you to everyone who joined in doing something over the weekend, exchanged banter on the WhatsApp group, joined in for the Burn’s dinner.  It was a really good weekend.  Now who’s up for Burn’s 21st to 23rd January 2022 in Snowdonia?