Well Lockdown is easing and the first weekend campsites were open six of us headed to North Wales for a weekend away. Kathy and Gill to spend a weekend with a climbing instructor, postponed from last year.  Stuart, Peter, Louie and Alan W for a weekend climbing and enjoying the mountains we’ve all missed.

A wet day Stuart and Alan W had hoped to arrive during a break in the rain. No such break so it was time to quickly pitch. Louie managed to time his arrival perfectly and pitched his tarp in the dry. 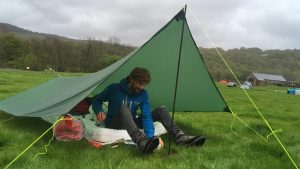 We all just about managed to sit out for a little while in the dry. Kathy, Gill and Peter had all opted for the weekend in a bunkhouse. With the rain forecast a sensible choice. Seeing his tent seams break down Alan W didn’t have much confidence in his tent, so used his bivvy bag inside it! 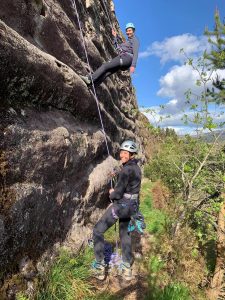 Alan W woke up in a damp tent – at least his sleeping bag was warm and dry. The three campers headed off to Moel Siabod café to meet Peter before heading off to Tremadog for the days climbing. The girls with their instructor headed of to Craig Y Tonnau for the day’s instruction covering movement, belay building, setting gear.

The boys started off on the Upper Tier at Tremadog with a few single pitch routes in the glorious sun. They then headed off down the road to

Craig y Gesail and all climbed Bramble Buttress as two ropes of two, again in glorious sun. After a multi pitch climb, Louie was chomping at the bit for a big mountain scramble, so it was off to the Ogwen valley; the North ridge of Tryfan was calling. It was a fantastic end to the day. Louie’s fast and light approach saw him snack less on top but we’re not going to let someone go hungry when there’s a big bag of beef jerky in a rucksack!

As forecast it was wet. The girls headed off to Beacon climbing wall. Peter joined then to shadow Sam, their instructor. They were coached on movement techniques and rope work. Stuart and Alan W headed off into the woods north of

Betws-y-Coed for a walk. In the woods they managed to avoid most of the rain, impressive feet considering the weather radar! The amount of recent raid did make viewing Swallow Falls from the north side of the river impressive.

Returning to the car coffee and cake were calling at the Moel Siabod café. Well actually two coffees! There was the odd dry spell but not enough as dinner had to be cooked in the tents. It was raining, but not as heavy as it had been. The Met Office showed Holyhead to be mostly rain free on Monday so that was the destination for tomorrow sorted.

Parking in the RSPB centre car park by South Stack Stuart and Alan W started off in light rain and followed the path towards Holyhead Mountain summit. The rain stopped in the short time it took to get to the summit. There were fine views over the north end of Holyhead Island. They then dropped down to the paths circumnavigating the mountain and walked around its southern end. Joining the path that dropped down to North 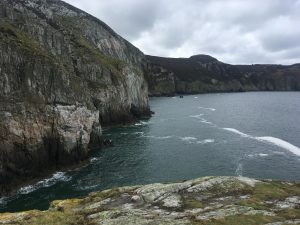 Stack. Descending to the lighthouse they spent some time watching the birds on the cliffs and the seals swimming below. Oh yer, they were also checking out the cliffs, trying to spot the famous climbs! Then it was back up all the steps and over to South Stack. Having a look at the climbs on Holyhead Mountain. This time they didn’t descend all the way. Again time was spent in sun watching the birds. Just look where all the photographers are pointing their big lenses to see something interesting! Stuart fell in love with some of those sea cliff lines and could see himself returning to climb them.

Holyhead is worthy of a visit to explore the climbs both on the mountain and the sea cliffs. Possibly, overshadowed by the mountains of Snowdonia not too far away and considered, like today, as a wet weather in the mountains destination. Maybe on a fine  day out from Snowdonia in the future?  Planning to miss the crowds in the mountains!