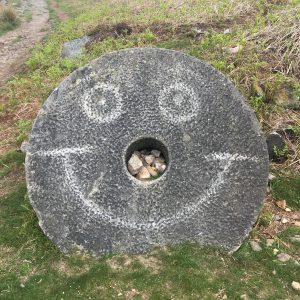 Monday 17th May saw the crucial easing of lockdown and the opening up of campsites.  All was go and we were off to the Peak District and Hardhurst Farm for a long awaited Bank Holiday weekend’s adventure!  Unusual, for a Bank Holiday, the weather was looking fine.

weekend.  Peter and Kathy were the first to arrive and claim a corner for us.  After pitching their tent they headed to Lawrencefield. On arrival Alex discovered a little oops – a plea for help and two club members rallied round!  No drama; weekend made cheaper and more comfortable.  Alex and David then headed off to Stanage to climb.

The majority of us then turned up over late afternoon/evening and joined the crowd in the corner.  The evening saw some of us with bookings for the Fox & Hounds (organised), some wondering down to the Travellers Rest (spontaneous) and the remainder eating on site, including Alan W who actually made some fresh fish cakes (what’s wrong with canned food?)  After such a long time it was really great to be back together sitting in a large circle chatting.

Victoria and Alastair joined us in the morning.  Everybody decided to climb today and we all headed to Burbage North to introduce Tom, Kate and James to the joys of climbing on grit.  David M and Alex T headed well away from the car park to the far end.  Alan M, Keith and Victoria went to Long Tall Sally.  The rest of us headed to Ash Tree Wall.  Later on we moved down to Sentinal and The Grazer and bumped into Alan M, Keith and Victoria who’d also moved there.

Similar to Friday evening some went off to eat in pubs and another large circle formed to cook, eat and chat.  Maybe drinking the odd refreshing cold beverage too!  Of the two who had family commitments on Saturday Tom turned up first and pitched his tent.  It was just starting to go dark as Gill arrived.  Stop, engine off, pop roof up = pitched.  Life is so much easier with a campervan! 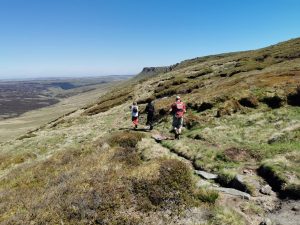 Malcolm, Floyd, Alex M, Kate and Rufus all headed off to do the Kinder Edge walk; a lap of the Kinder plateau.  Peter and Kathy were also walking and sensibly avoided the crowds in Castleton and those on Mam Tor and walked below Kinder.

Gill, Alan W, James and Tom went to Away from it All on Stanage where Gill did her 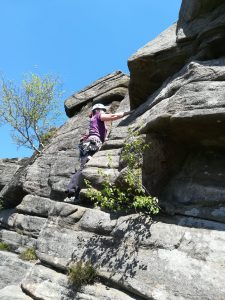 first independent leads, James started the transition from sport to trad leading and Tom had his introduction to the joys of outdoor climbing.  Victoria, Alan M and Keith all headed to Fern Crack area at Stanage Plantation.

It was great in the evening to have a number of us down at the Travellers Rest having dinner in their beer garden; we did spread out over a couple of tables.  Gill, Alan M & Malcolm all stayed ate and chilled at our base camp.  After dinner we gathered at the site and chatted as well as watching the International Space Station fly overhead just after dusk.

After packing up we all headed off to Crow Chin on Stanage for more climbing; it was really good to have the whole club together climbing in the sunshine. 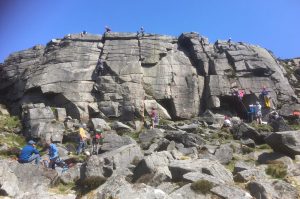 The weather gods had obviously missed that today was a Bank Holiday!  Keith & Alan M; Peter & Kathy as well as Alan W & Gill were climbing routes and then dropping their rope for our new outdoor climbers to have a go on the route.  Malcolm set up a top tope on Bent Crack and belayed all those in the group who wanted a go.  Some mammoth belaying sessions took place, luckily there weren’t too many others at Crow Chin!

Malcolm, Kate with little Rufus, Alex M, Tom, James, Alan W, Malcolm and Gill all headed to Fate and Youth for a last climb on the way back to the cars.

We’d waited a long time for this trip due to the pandemic.  It was so good to see so many of us out supporting each other and our Club.  It took a little getting used to being so close, yet maintaining a distance, from each other.  Thank you to all those experienced climbers who gave their time to climb with and belay new comers to the world of outdoors rock, or Wild Climbing as the BMC has announced!