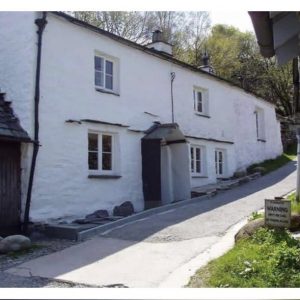 After driving up on Thursday evening Stacy, Dave C and Alan W headed over the Wrynose and Hardknott Passes.  The ‘clag’ they drove through was an omen for the day ahead!  After parking up Harter Fell was the first summit of the day, even after entering the ‘clag’ the navigation was fairly simple, head up.  The rock tower of the summit was very cold, damp and slippy but a worthy summit.  The route down to the Hardknott Pass road was a successful test of navigation as they joined the road exactly on their route. 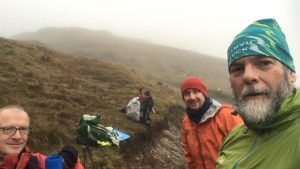 A quick lunch at the summit of the Hardknott Pass and it was off to the summit of Hard Knott itself before following the indistinct ridge down to the north to meet up with a path beside the River Esk back to the car, partly illuminated by head torches.  Most of the day was spent in the ‘clag’ and was an excellent navigation practice, compass bearings, step counting, timings and observation of ground features all contributed to the navigation.  So did the occasional confirmation via Dave C’s GPS; mostly they were close enough!

Much later the others all arrived, first Neal in his van, with his sweet pup Mimi on board, followed by Juan, closely followed by Gill, Adam and Amaad in Gill’s camper. Several of the party were quite traumatised by the approach road, one in particular, whose van parking sensors had been beeping the whole time since the main road! All made it to the hut with no issues, apart from being relieved 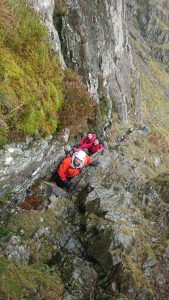 Stacy, Dave C, Juan and Amaad did Jack’s Rake, while Alan W, Gill and Adam went to Kendal Mountain Film Festival. We really enjoyed the films, superb as always. Afterwards Gill and Adam headed home and Alan W was picked up by Stacey and Dave C who had been Christmas shopping in Booths.  Neal drove over to Swinside for a dog walk and met up with some of his local friends.

Those who returned to the hut enjoyed Gill’s birthday cake, yes you can sometimes get lucky if you time things right!  Coniston Brewing’s Old Man Ale both toasted Gill and helped form the plan for tomorrow.

Dawned a clear, cold day, windy day with excellent visibility.  After cleaning up the hut Juan, Amaad, Stacy, Dave C and Alan W headed to Coniston and the car park at the end of the drivable part of Walma Scar Road.  Continuing on foot it didn’t take too long until Brown Pike summit was reached.  The clear sky gave excellent views all around the Lake District; fantastic. 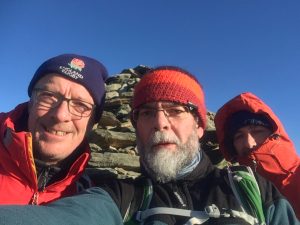 It was bitterly cold and breezy; not a day to hang around.  After Dow Crag Juan and Amaad returned to the cars via Goat Water while Stacy, Dave C and Alan W headed onto Coniston Old Man.  Such a contrast to Friday, maps and other navigation tools were hardly needed, apart to confirm the junction of the path down to pass Burstingstone Quarry on the return to the cars.

Another great weekend was had by all.